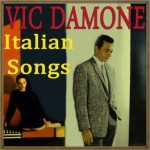 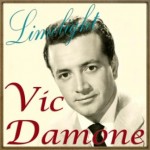 Vic Damone was born in Brooklyn, New York, to French-Italian immigrants based in Bari, Italy—Rocco and Mamie (Damone) Farinola. His father was an electrician; and his mother taught piano. His cousin was the actress and singer Doretta Morrow. Inspired by his favorite singer, Frank Sinatra, Damone began taking voice lessons. He sang in the choir at St. Finbar’s Church in Bath Beach, Brooklyn, for Sunday Mass under organist Anthony Amorello.

When his father was injured at work, Vic Damone had to drop out of high school. He worked as an usher and elevator operator in the Paramount Theater in Manhattan. He met Perry Como, while at the Paramount Theater. Vic stopped the elevator between floors, sang for him and asked his advice if he should continue voice lessons. Impressed, Como said, “Keep singing!” and referred him to a local bandleader. Vito Farinola decided to call himself Vic Damone, using his mother’s maiden name.

Vic Damone entered the talent search on Arthur Godfrey’s Talent Scouts and won in April 1947. This led to his becoming a regular on Godfrey’s show. He met Milton Berle at the studio and Berle got him work at two night clubs. By mid 1947, Damone had signed a contract with Mercury Records.
His first release, “I Have But One Heart”, reached #7 on the Billboard chart. “You Do” (released November 1) reached the same peak. These were followed by a number of other hits. In 1948 he got his own weekly radio show, Saturday Night Serenade.

In 1951, Vic Damone appeared in two movies: The Strip and Rich, Young and Pretty. From 1951 to 1953 he served in the United States Army, but before going into the service he recorded a number of songs which were released during that time. He served with future Northwest Indiana radio personality Al Evans, and also country music star Johnny Cash. After leaving the service, he married the Italian actress Pier Angeli (Anna Maria Pierangeli), and in 1954 made two more movies: Deep in My Heart and Athena. He also made some guest appearances on Milton Berle’s television show in 1954.

In 1955, Vic Damone had only one song on the charts, “Por Favor,” which did not make it above #73. However, he did have major roles in two movie musicals, Hit the Deck and Kismet. In early 1956, he moved from Mercury to Columbia Records and had some success on that label with hits like “On the Street Where You Live” (from My Fair Lady, his final pop top ten) and “An Affair to Remember” (from the movie of the same name). His six original, long-playing albums on Columbia between 1957 and 1961 were That Towering Feeling, Angela Mia, Closer Than a Kiss, This Game of Love, On the Swingin’ Side and Young and Lively.

In 1961, he was released by Columbia, moving over to Capitol Records, where he filled in the gap left by Frank Sinatra’s leaving to help found Reprise Records. He lasted at Capitol only until 1965; however, he recorded some of his most highly-regarded albums there, including two which made the Billboard chart, Linger Awhile with Vic Damone and The Lively Ones, the latter with arrangements by Billy May, who also arranged another of Damone’s Capitol albums, Strange Enchantment. Other original Capitol albums included My Baby Loves to Swing, The Liveliest, and On the Street Where You Live.

Other notable television work during this time included Damone’s three guest appearances on Judy Garland’s CBS variety series The Judy Garland Show (1963–64). In addition to his solo performances on these three episodes, Damone and Garland sang duet medleys of songs from Porgy and Bess, West Side Story, and Kismet.

In 1964, he sang Back Home Again in Indiana, before the Indianapolis 500 car race.
In 1965 Vic Damone moved next to Warner Bros. Records, releasing the albums You Were Only Fooling and Country Love Songs. On Warners he had one Top 100 chart hit: “You Were Only Fooling (While I Was Falling In Love).” The next year he moved again, to RCA Victor Records, releasing the albums Stay with Me, Why Can’t I Walk Away, On the South Side of Chicago and The Damone Type of Thing. In 1967, Damone hosted “The Dean Martin Summer Show”, which was rerun in 1971. In 1969 he released his last US chart record, a cover of the 1966 song “To Make A Big Man Cry”, which made the Billboard Easy Listening chart.

In 1971, Vic Damone started touring Las Vegas casinos as a performer, and although he had to declare bankruptcy in the early 1970s, he earned enough as a casino performer to clear up his financial difficulties. He extended his geographical range, touring through the United States and the United Kingdom, and as a result of his popularity decided to record some albums again, releasing them on the RCA label.

His final album was issued in 2002, with other albums being re-packaged and re-released. He has recorded over 2,000 songs over his entire career.
He has garnered new fans following the launch of the Vic Vic Damone website in 2002 www.vicdamone.com, managed by his son-in-law William “Bill” Karant.
One of his final public performances was on January 19, 2002 at the Raymond F. Kravis Center for the Performing Arts in Palm Beach, Florida. Damone did however step out of retirement on January 22, 2011, when he once again performed at the Kravis Performing Arts Center in Palm Beach, Florida to a sold out crowd. Damone dedicated this performance to his six grandchildren who had never seen him perform.

In Brett Ratner’s movie Money Talks, Chris Tucker’s character sees a commercial about Vic Damone and then pretends to be Damone’s son.
On June 12, 2009, Vic Damone released his autobiography titled Singing Was the Easy Part from St. Martin’s Press.
In December 2, 2011, at the age of 83, Damone launced an offical Facebook profile dedicated to his fans. In addition to posting recent photos Damone writes that besides spending time with his family he spends his retirement enjoying Golf and Football