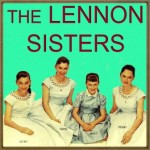 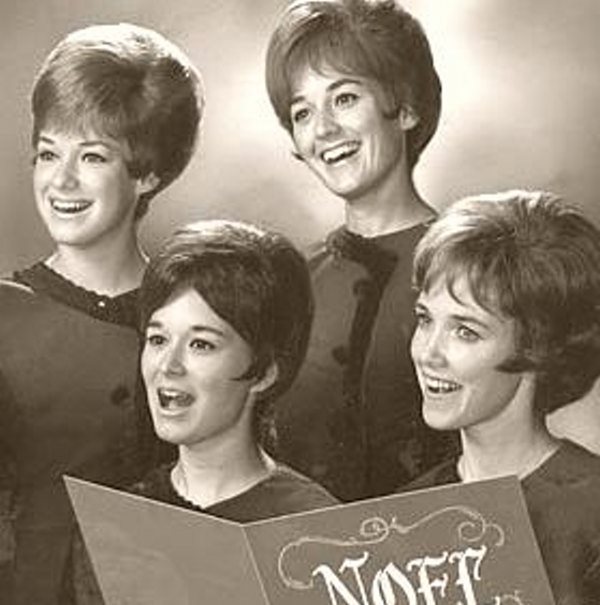 For thirteen years, from 1955 – 1968, the group appeared regularly on The Lawrence Welk Show, receiving union scale wages, which was $180 per week at that time. Although the original quartet was composed of the eldest sisters, in 1999, younger sister Mimi (b. 16 October 1955- Miriam Theresa) replaced Peggy upon her retirement. Dianne has also since retired. The current line-up of the Lennon Sisters is now a trio consisting of Mimi, Janet and Kathy. They appear mostly at Welk resorts.

Their parents married in early 1939. It is reported that the children are of German, Irish, and Mexican-American or Spanish ancestry. Their father, William Lennon (b. 1915-1969) worked as a milk-man for many years before getting a job at a local golf course. Their mother, Isabelle “Sis” (b. 1919-2005) remained at home to care for the needs of her very large family. Sis was the daughter of Reina (Spanish for Queen) Ysabella Alvarez Denning. Sources report that Sis is a first cousin to actor Leo Carrillo and is also related to other prominent California Spanish families such as the Yorbas and the Comachos.
The California Birth Index lists the maiden name for the mother of all the Lennon children as Denning. There is further discrepancy as to whether Denning is of Scottish or Bavarian origin. According to Wikipedia, the surname of Lennon is solely of Irish origin.

During their formative years, the family lived in Venice, California, in a modest, two-bedroom home. This included two parents, 11 children, and one grandmother. They were and are devout Roman Catholics and attended The Church of St. Mark, which is part of the Los Angeles Archdiocese. Most, or all of the children attended Catholic school. Throughout the Lennon Sisters’ career, their faith has had a major influence/role in both their lives and careers. Many of their songs are either hymns or of a “religious” or spiritual nature. (Source: interview/live performance, 6/18/2013, Home and Family, Hallmark Channel).

The Lennon Sisters made its television debut on The Lawrence Welk Show on Christmas Eve – December 24, 1955. A high school classmate, Larry Welk, son of Lawrence Welk, brought them to the attention of his father. Welk was at home, sick in bed, when his son brought the sisters in to sing for him. Mr. Welk was so impressed that he immediately booked them for that week’s show. They were a mainstay on the show until they left to start a career of their own in 1968. The quartet became a trio from 1960 to 1964; eldest sister Dianne married, left the group, and then rejoined.

Peggy sang the high harmony part, Kathy the low, and Janet and Dianne sang the middle and lead harmonies. Janet also specialized in barbershop or counter-harmony singing, taught to her by her father (who performed during the big band era in a quartet with his own three brothers). The girls idolized Patti Page’s multi-track vocal sound, feeling they achieved something close to her smooth blend in their Dot recording of “Stars Fell On Alabama.” Kathy was especially fond of Connie Francis, evident in her solo recording of “Malaguena Salerosa,” which showcased her impressive vocal range. The Lennon Sisters made no secret that they were huge fans of the innovative, intricate musical stylings of both The Andrews Sisters and The Mills Brothers.

Their first hit, “Tonight, You Belong to Me” reached #15 on the charts in 1956. In 1961, the single, “Sad Movies (Make Me Cry)”, (Dot 16255), turned out to be their highest-charting record. It was the only number #1 single of their career, reaching the top of the charts in Japan. Although much of the group’s fame was based on their television appearances, they also recorded frequently for Dot Records in the 50s and 60s, producing a dozen albums, featuring their interpretations of well known standards such as “Among My Souvenirs,” “Moon River,” “Twilight Time,” and many others. Some of their best known recordings included “Scarlet Ribbons,” “Greensleeves,” and Schubert’s “Ave Maria.” A themed LP entitled “Dominique” featured The Lennon Sisters with their musically talented siblings and cousins performing a variety of 60s folk songs, including “Where Have All the Flowers Gone,” “If I Had My Way (The Sermon of Samson),” and the title track, Dominique.

They recorded briefly for Mercury Records after leaving Dot, focusing on more contemporary pop/light-rock fare, such as “Can’t Take My Eyes Off of You” and “Never My love.” Their three most popular albums were “Lawrence Welk presents The Lennon Sisters: Best-Loved Catholic Hymns (Dot);” “Christmas with The Lennon Sisters (Dot); and “Noel,” their Christmas album for Mercury Records. Their full-bodied, homestyle choral blend was perfect for such yuletide favorites as “Adeste Fideles,” “Christmas Island,” “Faith of Our Fathers,” “The Star Carol,” and “Home for the Holidays.”

Several souvenir items, such as coloring books, paper dolls and story books featuring the Lennon sisters, were produced .
In 1969, the sisters were set to star in their own variety show, Jimmy Durante Presents the Lennon Sisters Hour. However, six weeks before the show premiered, (12 August) tragedy struck the family. Their father, William Lennon, was shot and fatally wounded in the parking lot of the Venice Golf Course in Marina Del Rey where he worked.
He was only 53. The murderer, a delusional stalker named Chet Young, believed himself married to Peggy and was convinced that Mr. Lennon stood in his way of his “marriage” to Peggy and had to be eliminated. Two months later, Young used the same weapon on himself to commit suicide. The sisters discovered an unopened letter containing a cut out of their father, a picture of a gun pointed at his head, and the words “High Noon” (the time of the murder). (Source, Dr. Doreen Orion, I Know You Really Love Me) The sisters were devastated by the death of their father and in the wake of the murder, their new show, Jimmy Durante Presents The Lennon Sisters Hour lasted only one season, and was cancelled by ABC.

In the 70s, The Lennon Sisters performed regularly on The Andy Williams Show, and toured with Williams across the country, including engagements at Caesar’s Palace in Las Vegas. They also appeared on several game shows, including Family Feud, Tattletales and The Hollywood Squares. From 1994 to 2004, the quartet headlined at the Welk Champagne Theater in Branson, Missouri. When Peggy retired from singing in 1999, younger sister Mimi took her place, and when Dianne left for a second time in 2001, the act became a trio again for the rest of its run in Branson.

While continuing to play tour dates, Kathy and Janet Lennon have branched out into the toy market, designing and selling a line of “Best Pals” dolls. In addition to the dolls, the sisters have recorded CDs of favorite children’s songs for the “Best Pals” line. Kathy has appeared on a religious TV show called Search, produced by Catholic TV Studios in California.
The four original Lennon Sisters wrote an autobiography entitled Same Song, Separate Voices, first published in 1985 with a new edition in 1995.
Two of their five brothers, Kipp & Pat Lennon, are members of the band Venice, which also includes their cousins Michael and Mark Lennon