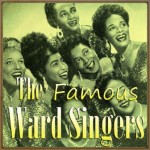 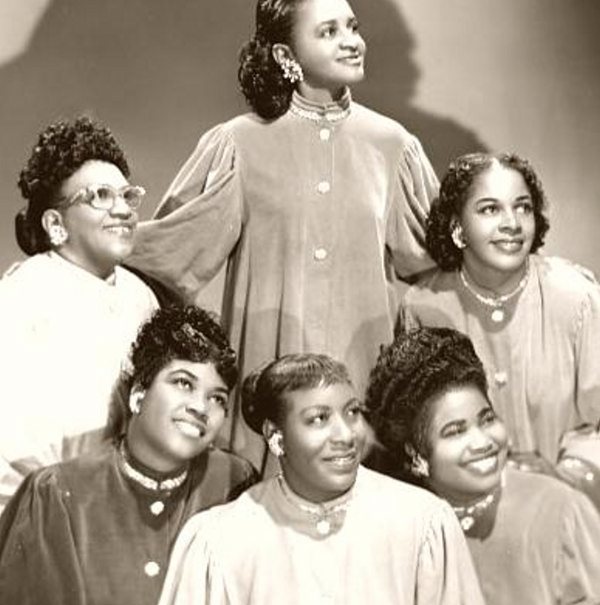 Clara Ward’s mother, Gertrude Ward (1901–1981), founded the Ward Singers in 1931 as a family group, then called variously The Consecrated Gospel Singers or The Ward Trio, consisting of herself, her youngest daughter Clara, and her elder daughter Willa.
Clara Ward made her first solo recording in 1940 and continued accompanying the Ward Gospel Trio.

The Ward Singers began touring nationally in 1943, after making a memorable appearance at the National Baptist Convention held in Philadelphia, Pennsylvania that year. Henrietta Waddy joined the group in 1947 after Willa Ward retired; she added a rougher alto and the enthusiastic stage manners taken from her South Carolina church background. The group’s performance style, such as the mimed packing of suitcases as part of the song “Packin’ Up”, may have been condemned by some purists as “clowning” but was wildly popular with their audiences.

The addition of Marion Williams, who came out of the Pentecostal tradition growing up in Miami, Florida, brought even more to the group. A powerful singer with a preternaturally broad range, she was able to reach the highest registers of the soprano range without losing either purity or volume, and could also swoop down to growling low notes in the style of a country preacher. Williams’ singing helped make the group nationally popular when they began recording in 1948.

In 1949 the Ward Singers toured from Philadelphia to California in their new Cadillac, appeared on TV in Hollywood, and recorded for the Miltone Record Company of Los Angeles. The Miltone recordings were purchased in a multi-artist package by Gotham Record Company, which had moved to Philadelphia. Gotham’s Irv Ballen recorded some new Ward material, including “Surely God Is Able”, and some of the Ward Singers’ Gotham recordings were transferred to Savoy Record Company in Newark, New Jersey to settle a contract dispute. When Savoy began contracting with the Ward Singers for new recordings in the 1950s, they were mostly recorded and engineered in Bergen County, New Jersey by Rudy Van Gelder.

In 1950, Clara Ward and the Famous Ward Singers of Philadelphia made their first appearance at Carnegie Hall in New York City on a gospel program titled Negro Music Festival, produced by gospel music pioneer Joe Bostic, sharing the stage with Mahalia Jackson and appearing there at Carnegie Hall on Bostic’s program again in 1952.

Over the years, Gertrude Ward created a booking agency for gospel acts, sponsored tours under the name “The Ward Gospel Cavalcade”, established a publishing house for gospel music, and even wrote a book for churches on how to promote gospel programs. Gertrude also created and managed a second group, “The Clara Ward Specials”, to accompany the Ward Singers. Although as musical director of the Ward franchise Clara was willing to share the spotlight with her talented co-singers, she and her mother were tightfisted about sharing the group’s financial rewards with other members. According to Willa Ward’s biography of Clara Ward, with the exception of Gertrude and Clara, Willa and other members of the group were grossly underpaid. In addition, their meager earnings were further reduced because Gertrude and Clara provided their housing and charged them for it. Accordingly, stars such as Marion Williams and Frances Steadman not only had to accept second billing and lesser pay for their work, but pay their employers rent out of their earnings.

Williams left the group in 1958 when her demand for a raise and reimbursement for hotel expenses was rejected; she was followed shortly thereafter by the rest of the group—Henrietta Waddy, Esther Ford, Frances Steadman and Kitty Parham—who formed a new group, “The Stars of Faith”. Their departure marked the end of the glory days for the Ward Singers, who later alienated much of their churchgoing audience by performing in Las Vegas, nightclubs, and other secular venues in the 1960s. By this time the late Queen of Gospel Dr. Albertina Walker had formed her group The Caravans in 1952, following the advice of her mentor the great Mahalia Jackson, and the spotlit had transitioned to them as they blazed the gospel trail.

In 1963 Clara Ward was the second gospel singer to sing gospel songs on Broadway in Langston Hughes’ play Tambourines To Glory. She was also the musical director for this play. The first being her former group members, which were known as the Stars of Faith, which starred Langston Hughes in the first Gospel stage play and first play that featured an all black cast to be produced on Broadway, The Black Nativity.

While performing at the Castaways Lounge in Miami Beach, Florida, in the 1960s, Clara collapsed and was rushed to the hospital and told if she recovered she would never sing or walk again. Gertrude Ward telephoned Mother Dabney, a spiritual healer in Philadelphia, PA, and Clara miraculously was restored to health. Details were reported in the Gospel News Journal published by Marvin Bunton. Clara later recounted this experience in a church service at the Wayside Chapel in Sydney, Australia. This testimony was released on an LP issued on the WARD label along with Clara singing “The Lord’s Prayer” and a few other Ward musical selections.

During the group’s heyday, however, it was both widely popular and highly influential, emphasizing glamor—traveling in over-sized Cadillacs, preferring sequined gowns for choir robes, and wearing wigs and jewelry that more conservative churchgoing women considered too worldly—while bringing Gertrude Ward’s shrewd entrepreneurial sense to the gospel music business at large. Though Gertrude was a savvy negotiator, her understanding of the value of music copyrights was limited. According to Willa Ward, Gertrude was misled into believing that the songwriting royalties from Clara’s compositions would be minimal and accordingly sold them. In her book Willa said the music ended up under the control of Herman Lubinsky, founder of Savoy Records (who was known for his unscrupulous exploitation of recording artists), and became owned by Planemar Music Company.

Clara Ward was the first gospel singer to sing with a 100-piece symphony orchestra in the 1960s. They recorded an album together on the Verve label, V-5019, The Heart, The Faith, The Soul of Clara Ward, and the Ward Singers performed their music live in Philadelphia with the symphony and the Golden Voices Ensemble.

Though Clara Ward did not regularly sing secular music as a soloist or with her groups, she did sing backup for pop artists with her sister Willa’s background group, most notably on Dee Dee Sharp’s smash hit, ‘Mashed Potato Time”, which reached #1 on Billboard’s pop chart in 1962. In 1969 she recorded an album for Capitol Records, Soul and Inspiration, which consisted of pop songs from Broadway plays, Hollywood movies and the Jimmy Radcliffe song of hope “If You Wanna Change The World”. This album was later reissued on the Capitol’s budget Pickwick label minus one song. In the same year she recorded an album in Copenhagen, Denmark on the Philips label, Walk A Mile In My Shoes, which included the pop title song, other pop songs (such as “California Dreaming”) and a few gospel songs. She also recorded an album for MGM/Verve, Hang Your Tears Out To Dry, which included country and Western, blues/folk, pop and an arrangement of the Beatles’ hit song, “Help”. Her 1972 album Uplifting on United Artists, produced by Nikolas Venet and Sam Alexander, included her stunning interpretation of Bill Wither’s pop hit “Lean On Me” and a rearrangement of the Soul Stirrer’s 1950’s recording of “Thank You, Jesus”. Also in 1972 Ward, because she was under exclusive contract to United Artists at this time, provided vocals for a Canned Heat’s album The New Age, on the ballad “Lookin’ For My Rainbow”; it was released on that album and as a single 45 rpm record.

In 1968 Clara Ward and her singers toured Vietnam at the request of the U.S. State Department and the U.S.O. It was a very popular war-time tour supported by recorded radio broadcasts of the Ward Singers on U.S. Armed Forces Radio. The Ward Singers narrowly missed death when their hotel in Vietnam was bombed and several guests died. However, Clara was never afraid because she knew she was bringing some momentary joy, consolation, and a religious message to soldiers, many of whom would not return home alive, and they showed their appreciation and enthusiasm for her style of gospel music. When asked during a TV interview what was her favorite concert, Clara responded that these tours in Vietnam during the war were her favorite. She was invited back to Vietnam by U.S.O. in 1969 for several more months. These war-time tours were filmed and all the Ward Singers were given special certificates of recognition by the U.S. Army. The U.S.O did not pay a salary to entertainers, but after these tours the Ward Singers went to Japan each year for commercial concerts and released LPs in Japan to coincide with these tours.

Clara Ward co-starred in the Hollywood movie A Time to Sing, starring Hank Williams, Jr., Shelley Fabares, Ed Begley, and D’Urville Martin. She was cast as a waitress in a Nashville, Tennessee cafeteria who inspires a young singer, played by Hank Williams, Jr., to pursue his dream of becoming a Country & Western recording artist. There are also several scenes of the Clara Ward Singers performing gospel songs. This movie was released by MGM in 1968 and Clara’s picture appears on lobby cards and other movie advertisements. Other movie appearances include Its Your Thing starring the Isley Brothers, and Spree, also known as Night Time in Las Vegas.

The late 1960s and early 1970s were an extremely busy and successful time for the Clara Ward Singers. The summer months usually found them at the Golden Horseshoe Club in Disneyland in Anaheim, California or touring colleges across the United States. They also toured in Australia, Japan, Europe, Indonesia, and Thailand. They had a one-day TV special in London, England. They were in demand on American TV shows constantly and appeared on The Mike Douglas Show over a dozen times. They appeared on Oral Roberts’ Country Roads TV special and an album soundtrack was issued of this show. Clara still found time to sing at her mother’s church, the Miracle Temple of Faith for All People in Los Angeles. and at Victory Baptist Church. Her mother, Gertrude Ward, also had a popular religious radio program in the Los Angeles market.

Despite her career success, Ward’s life was an unhappy one. Financial hardships caused her and her family to move 19 times before her adulthood. Sexually abused in childhood by a cousin and relentlessly driven as prime breadwinner by her mother throughout her life, Clara’s life was one of constant work and little joy. According to her sister Willa, Gertrude Ward recognized Clara’s exceptional musical ability when Clara was a child and controlled and manipulated her throughout her life. In her biography of Clara, Willa attests that Gertrude worked to prevent Clara from forming any romantic attachments. Although Clara eloped as a teenager (at age 17 in 1941), her mother forced her to tour and the strain caused the always frail Clara to have a miscarriage. Her marriage ended after only one year. Willa describes Clara as explaining her occasional lesbian encounters as the sexual expression likely to escape her mother’s notice. Her only real happiness seems to have come from her longtime romance with Rev. C. L. Franklin (with whom the Ward groups extensively toured), the famous Detroit-based preacher and father of the legendary Aretha Franklin.

Ward’s poor health forced her to retire in the early 1970s. She died after two strokes in 1973. Aretha Franklin and Rev. C. L. Franklin sang at her funeral in Philadelphia in 1973; Marion Williams sang at her second memorial service held days later in Los Angeles, California.
Clara Ward is interred in the Forest Lawn Memorial Park Cemetery in Glendale, California.