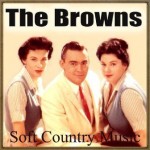 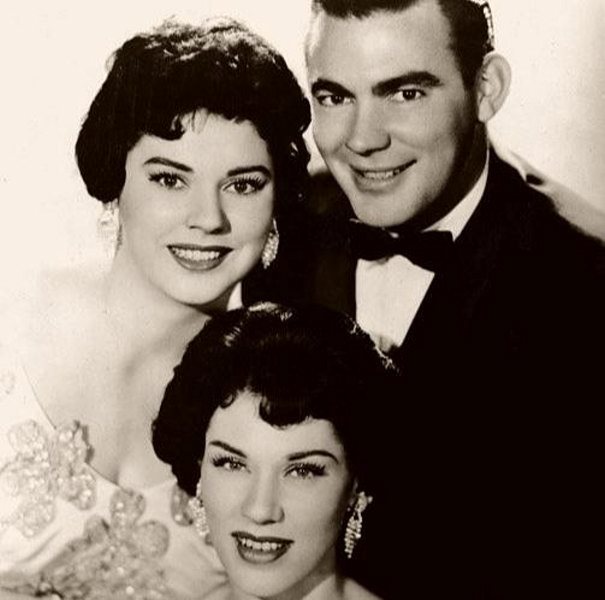 The Browns were an American country and folk music vocal trio best known for their 1959 Grammy-nominated hit, “The Three Bells”. The group, composed of Jim Ed Brown and his sisters Maxine and Bonnie Brown, had a close, smooth harmony characteristic of the Nashville sound, though their music also combined elements of folk and pop. They disbanded in 1967.

James Edward, older sister Maxine, and younger sister Bonnie Brown sang individually in Pine Bluff, Arkansas until 1954, when Maxine and Jim Ed signed a record contract as a singing duo. They earned national recognition and a guest spot on Ernest Tubb’s radio show for their self-penned song “Looking Back to See”, which hit the top ten and stayed on the charts through the summer of 1954. The song would be a hit again nearly 20 years later for Buck Owens and Susan Raye in 1972.

They were joined in 1955 by then-recent high school graduate, 18-year-old Bonnie, and began performing on Louisiana Hayride in Shreveport, Louisiana. By the end of 1955, the trio was appearing on KWTO-AM in Springfield, Missouri, and had another top ten hit with “Here Today and Gone Tomorrow”, which got a boost by their appearances on ABC-TV’s Ozark Jubilee, which Maxine Brown called “our real breakthrough.” Jim Ed and Maxine had first appeared on the show as a duo in 1955. Producer Si Siman signed them with RCA Victor in 1956, and soon they had two major hits, “I Take the Chance” (a cover of a Louvin Brothers composition that showed the Browns’ close harmony) and “I Heard the Bluebirds Sing”. When Jim Ed was drafted in 1957, the group continued to record while he was on leave, and sister Norma filled in for him on tours, as did Billy Walker.

In 1959, The Browns scored their biggest hit when their folk-pop single “The Three Bells” reached No. 1 on the Billboard Hot 100 pop and country charts. The song also peaked at No. 10 on Billboard’s Rhythm and Blues listing. Based on a song called “Les trois cloches”, it was originally a hit in France for Édith Piaf. The recording sold over one million copies, and was nominated for both Record of the Year and the Best Group or Vocal Performance in the Grammy award categories in 1959. Their version of “Blue Christmas” reached No. 97 on the Billboard Hot 100 singles chart in December 1960.

The Browns appeared on The Ed Sullivan Show and Dick Clark’s American Bandstand, and followed up with “Scarlet Ribbons” and “The Old Lamplighter”, recordings that also did well on both the pop and country charts. With an international following, they toured Europe extensively and saw further moderate success on the country music charts. In 1963, they joined the Grand Ole Opry.

Jim Ed Brown began recording as a solo artist for RCA in 1965 and these efforts quickly began overshadowing the trio’s recordings. Sister Maxine sang lead vocal on the final singles in 1968, “Big Daddy” and “I Will Bring You Water” with Jim Ed only supplying background vocals suggesting the stage was being set for the breakup of the trio and a possible solo career for Maxine as well. The trio did indeed disband that year and Maxine signed with Chart Records in 1969, resulting in a small hit with “Sugar Cane County”.

In the 1980s, The Browns began performing occasionally in concert for the first time in nearly 20 years. In 2006, the trio performed “The Old Lamplighter” and “The Three Bells” for the PBS special, Country Pop Legends.