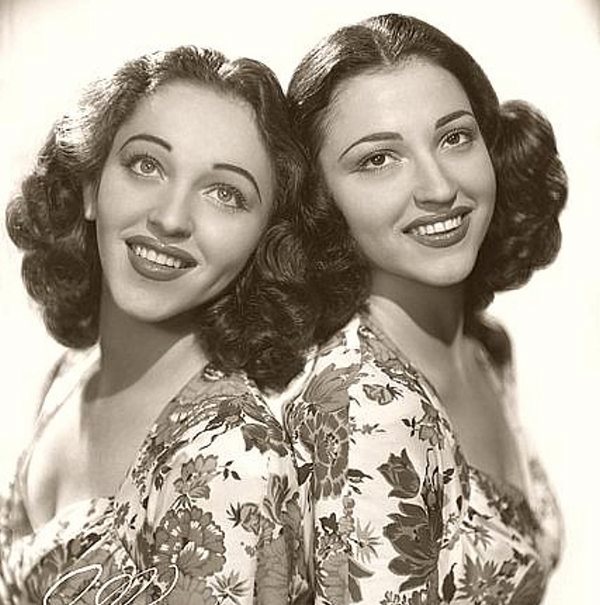 Minnie and Clara were born in the Bronx, New York to Ashkenazi Jewish parents, Herman and Ester, from Russia and Austria, respectively, and two younger sisters, Celia and Julia. When Minnie and Clara decided to entertain by singing in Yiddish, as The Bagelman Sisters, their father told them they would need to do it in the manner of the Old World and not with American accents.

The young girls got their first break as singers on WLTH Radio’s “Uncle Norman” show for children and were still then known as The Bagelman Sisters. They made their first recordings with Victor Records in the late 1930s. They made a name for themselves as Yiddish jazz singers. When the Andrews Sisters’ version of the Yiddish song, “Bei Mir Bist Du Schön”, became a hit, musician and composer Sam Medoff, also known as Dick Manning, started his “Yiddish Melodies in Swing” radio program on New York’s WHN. Before joining the radio show, the sisters made a change of their stage surname from Bagelman to Barry.

From 1937 until the mid-1950s they performed on the program, where they would sing jazz recordings in Yiddish. Their recordings included popular tunes, such as “Rain Drops Keep Falling on My Head” translated into Yiddish (“Trop’ns Fin Regen Oif Mein Kop”). They also performed in New York’s Catskills resort hotels. They eventually toured with Mickey Katz.

During the height of their popularity, they made appearances on the Ed Sullivan and Jack Paar shows and were one of the few American acts to tour the Soviet Union in 1959. The sisters entertained Israeli troops during the Yom Kippur War. The Barry Sisters “didn’t look like the typical Yiddish theater stars or singers of that era,” said Breier. “They looked glamorous. And they spared no expense for their orchestrations — they always had the best orchestrations possible.”

Merna Barry, later Mrs. Emanuel Pine, was born around 1923 and died on October 31, 1976 from a brain tumor following a lengthy hospitalization in Manhattan’s Flower and Fifth Avenue Hospital. Claire Barry (later Mrs. Easton) was born in 1920 and died on November 22, 2014, aged 94, in Aventura, Florida. She was survived by a daughter, Joy Pargman. Claire Barry Easton, who survived her younger sister by almost forty years, was featured in the 2002 NPR radio show, The Yiddish Radio Project.

The sisters’ 11th and final album, “My Way”, was issued in 1973. Danny Stiles frequently played their records on his radio show.