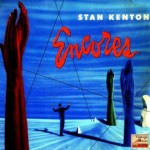 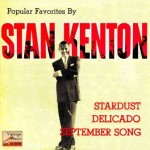 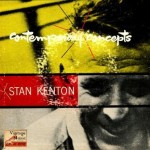 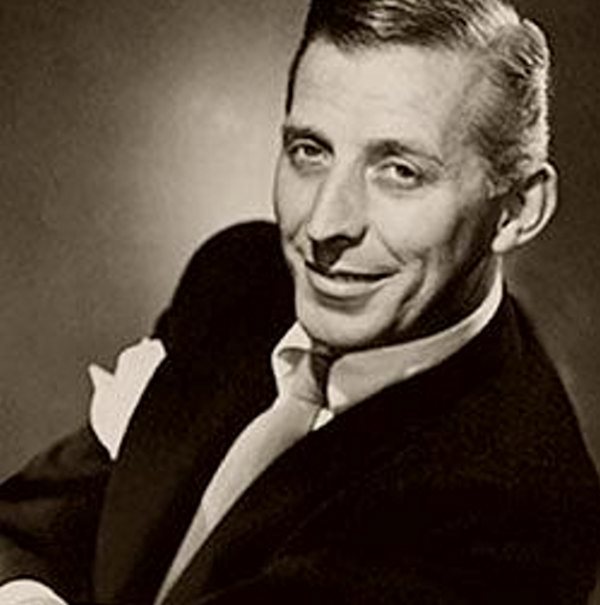 Stanley Newcomb “Stan” Kenton (December 15, 1911 – August 25, 1979)was a pianist, composer, and arranger who led an innovative, influential, and often controversial American jazz orchestra. In later years he was active as an educator.

Stan Kenton was born in Wichita, Kansas, and raised first in Colorado, then in California. He learned piano as a child, and while still a teenager toured with various bands. He attended Bell High School, in Bell, California, where he graduated in 1930. In June 1941 he formed his own band, which developed into one of the best-known West Coast ensembles of the 1940s. In the mid-1940s, Kenton’s band and style became known as “The Wall of Sound”, a tag later used by Phil Spector.

Stan Kenton played in the 1930s in the dance bands of Vido Musso and Gus Arnheim, but his natural inclination was as a band leader. In 1941 he formed his first orchestra, which later was named after his theme song “Artistry in Rhythm”.

A competent pianist, influenced by Earl Hines, Stan Kenton was much more important in the early days as an arranger and inspiration for his loyal sidemen. Although there were no major names in his first band (bassist Howard Rumsey and trumpeter Chico Alvarez come the closest), Kenton spent the summer of 1941 playing regularly before a very appreciative audience at the Rendezvous Ballroom in Balboa Beach, CA. Influenced by Jimmie Lunceford (who, like Kenton, enjoyed high-note trumpeters and thick-toned tenors), the Stan Kenton Orchestra struggled a bit after its initial success. Its Decca recordings were not big sellers and a stint as Bob Hope’s backup radio band was an unhappy experience; Les Brown permanently took Kenton’s place.

By late 1943 with a Capitol Records contract, a popular record in “Eager Beaver”, and growing recognition, the Stan Kenton Orchestra was gradually catching on. Its soloists during the war years included Art Pepper, briefly Stan Getz, altoist Boots Mussulli, and singer Anita O’Day. By 1945 the band had evolved quite a bit. Pete Rugolo became the chief arranger (extending Kenton’s ideas), Bob Cooper and Vido Musso offered very different tenor styles, and June Christy was Kenton’s new singer; her hits (including “Tampico” and “Across the Alley From the Alamo”) made it possible for Kenton to finance his more ambitious projects. A popular recording of “Laura” was made, the theme song from the film Laura (starring actress Gene Tierney), and featured the voices of the band.

Calling his music “progressive jazz,” Stan Kenton sought to lead a concert orchestra as opposed to a dance band at a time when most big bands were starting to break up. By 1947 Kai Winding was greatly influencing the sound of Kenton’s trombonists, the trumpet section included such screamers as Buddy Childers, Ray Wetzel, and Al Porcino, Jack Costanzo’s bongos were bringing Latin rhythms into Kenton’s sound, and a riotous version of “The Peanut Vendor” contrasted with the somber “Elegy for Alto”. Kenton had succeeded in forming a radical and very original band that gained its own audience.

In 1949 Stan Kenton took a year off. In 1950 he put together his most advanced band, the 39-piece Innovations in Modern Music Orchestra that included 16 strings, a woodwind section, and two French horns. Its music ranged from the unique and very dense modern classical charts of Bob Graettinger to works that somehow swung despite the weight. Such major players as Maynard Ferguson (whose high-note acrobatics set new standards), Shorty Rogers, Milt Bernhart, John Graas, Art Pepper, Bud Shank, Bob Cooper, Laurindo Almeida, Shelly Manne, and June Christy were part of this remarkable project, but from a commercial standpoint, it was really impossible. Kenton managed two tours during 1950-1951 but soon reverted to his usual 19-piece lineup.

Kenton’s last successful experiment was his mellophonium band of 1960-1963. Despite the difficulties in keeping the four mellophoniums (which formed their own separate section) in tune, this particular Kenton orchestra had its exciting moments; the albums “Adventures in Jazz” and “West Side Story” (arrangements by Johnny Richards) each won Grammy awards in 1962 and 1963.

Kenton Plays Wagner (1964) was an important project, produced in concert with his interests in jazz education and encouraging big band music in high schools and colleges instructing what he called “progressive jazz.” Stan knew what he had in the body of work that was The Stan Kenton Orchestra and in the remainder of his life and career, he took on the challenge of ensuring his legacy that was Progressive Jazz.

In the early 1970s Stan Kenton split from his long-time association with Capitol Records and formed his own label, “The Creative World of Stan Kenton”. Recordings produced during the 1970s on this new label included several “live” concerts at various universities and are a testament to his devotion to education. In addition, Kenton made his charts available to college and high-school stage bands.

When Stan Kenton took to the road during the early 70’s and up to his last tour, he took with him seasoned veteran musicians (Willie Maiden, Warren Gale, Graham Ellis and others) teaming them with relatively unknown young artists to mentor America’s youth and take advantage of the unchecked energy in those young players while at the same time preserving the legacy of his work as an active art form.

New Stan Kenton arrangements (including those by Hank Levy, Bill Holman, Bob Curnow, Willie Maiden and Ken Hanna) expanded the creative foundation that nurtured original musical exploration by these younger artists long after Gabe Baltazar’s “graduation” in 1965. Many alumni became educators and itinerate clinicians caught up in the art of inspiring younger players (Mike Vax, The Baron Jon Von Ohlen, Chuck Carter, and Richard Torres). A few went on to take their musical careers to the next level (Peter Erskine, Dick Shearer) and beyond.

Jack Sandmeier, Road Manager during these years, tells the story of an unusual meeting in a hotel lobby lounge between Woody Herman and Kenton. Unusual because they both toured more than fifty (50) weeks a year “one-nighters,” in order to keep their respective bands on the road, they hardly ever met. In discussing a chronically late band member, Herman said toStan Kenton…”Fire his ass, there’s thousands of them and only two of us.”
He had a skull fracture from a fall in 1977 while on tour in Reading, PA. He entered Midway Hospital on August 17, 1979 after a stroke and later died