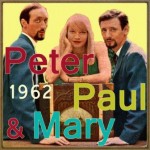 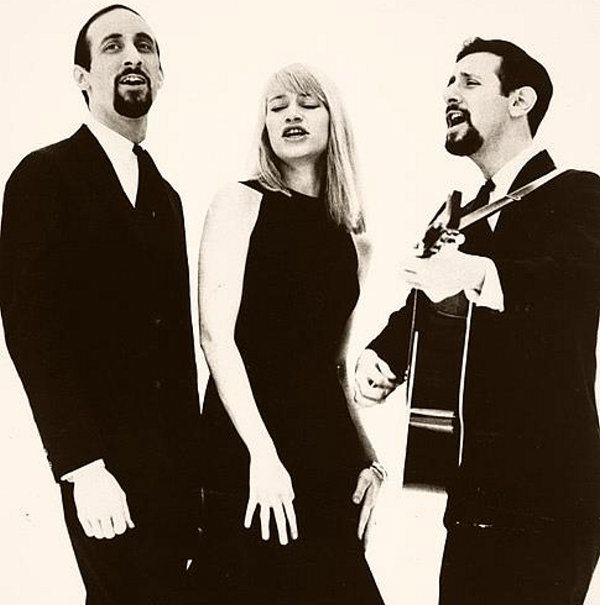 Peter, Paul & Mary were a United States folk-singing trio whose nearly 50-year career began with their rise to become a paradigm for 1960s folk music. The trio was composed of Peter Yarrow, Paul Stookey and Mary Travers. After the death of Mary Travers in 2009, Yarrow and Stookey continued to perform as a duo under their individual names.

Mary Travers has said she was influenced by Woody Guthrie, Pete Seeger, and the Weavers. In the documentary Peter, Paul & Mary: Carry It On — A Musical Legacy members of the Weavers discuss how Peter, Paul and Mary took over the torch of the social commentary of folk music in the 1960s.

Manager Albert Grossman created Peter, Paul and Mary in 1961, after auditioning several singers in the New York folk scene. After rehearsing them out of town in Boston and Miami, Grossman booked them into The Bitter End, a coffee house, nightclub and popular folk music venue in New York City’s Greenwich Village.

They recorded their first self-titled debut album, Peter, Paul and Mary, the following year. It included “Lemon Tree”, “500 Miles”, and the Pete Seeger hit tunes “If I Had a Hammer” (subtitled “The Hammer Song”) and “Where Have All the Flowers Gone?”. The album was listed in the Billboard Magazine Top Ten for 10 months, including seven weeks in the #1 position. It remained a main catalog-seller for decades to come, eventually selling over two million copies, earning Double Platinum certification from the RIAA in the United States alone.

In 1963 the group also released “Puff, the Magic Dragon”, with music by Yarrow and words based on a poem that had been written by a fellow student at Cornell, Leonard Lipton. Despite urban myths that insist the song is filled with drug references, it is actually about the lost innocence of childhood.
That year the group performed “If I Had a Hammer” at the 1963 March on Washington, best remembered for Reverend Martin Luther King, Jr.’s “I Have a Dream” speech. One of their biggest hit singles was the Bob Dylan song “Blowin’ in the Wind”. They also sang other Bob Dylan songs, such as “The Times They Are a-Changin'”; “Don’t Think Twice, It’s All Right,” and “When the Ship Comes In.” Their success with Dylan’s “Don’t Think Twice, It’s All Right” aided Dylan’s “The Freewheelin’ Bob Dylan” album into the Top 30; it had been released four months earlier.

The trio broke up in 1970 to pursue solo careers. Travers recorded five solo LPs and did concerts and lectures across the United States. She also produced, wrote, and starred in a BBC-TV series. Stookey formed a Christian music group called the Body Works Band. Yarrow co-wrote and produced Mary MacGregor’s “Torn Between Two Lovers” (#1, 1977) and earned an Emmy for three animated TV specials based on “Puff the Magic Dragon.”
Stookey wrote “The Wedding Song (There is Love)” for Yarrow’s marriage to Marybeth McCarthy, the niece of senator Eugene McCarthy, according to Stookey during an interview on the DVD “Carry It On,” released in 2004 by Rhino Records.

In 1972, they reunited for a concert at Madison Square Garden to support George McGovern’s presidential campaign, and again in 1978, for a concert to protest against nuclear energy. This concert was followed by a summer reunion tour, which proved to be so popular that the group decided to reunite more or less permanently in 1981. They continued to record albums together and tour, playing around 45 shows a year, until the 2009 death of Mary Travers.
The group was inducted into the Vocal Group Hall of Fame in 1999.

Peter, Paul & Mary were prolific political activists for their involvement in the peace movement and other causes. They were awarded the Peace Abbey Courage of Conscience on September 1, 1990.
In 2004, Travers was diagnosed with leukemia, leading to the cancellation of the remaining tour dates for that year. She received a bone marrow transplant. She and the rest of the trio resumed their concert tour on December 9, 2005 with a holiday performance at Carnegie Hall.
Peter, Paul and Mary received the Sammy Cahn Lifetime Achievement Award from Songwriters Hall of Fame in 2006.
The trio sang in Mitchell, South Dakota, George and Eleanor McGovern Library and Center for Leadership dedication concert on October 5, 2006.
The trio canceled several dates of their summer 2007 tour, as Mary took longer than expected to recover from back surgery and later had to undergo a second surgery, further postponing the tour.

Travers was unable to perform on the trio’s tour in mid-2009 because of her leukemia, but Peter and Paul performed the scheduled dates as a duo, calling the show “Peter & Paul Celebrate Mary and 5 Decades of Friendship.”
The Peter, Paul & Mary trio came to an end on September 16, 2009, when Mary Travers died at age 72 of complications from chemotherapy, following treatment for leukemia. It was the same year (2009) they were inducted into the Hit Parade Hall of Fame.
In 2010, Peter Yarrow and Paul Stookey, the surviving members of Peter, Paul and Mary, requested that the National Organization for Marriage stop using their recording of “This Land is Your Land” at their rallies, stating in a letter that the organization’s philosophy was “directly contrary to the advocacy position” held by the group.