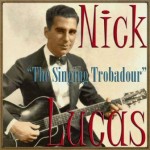 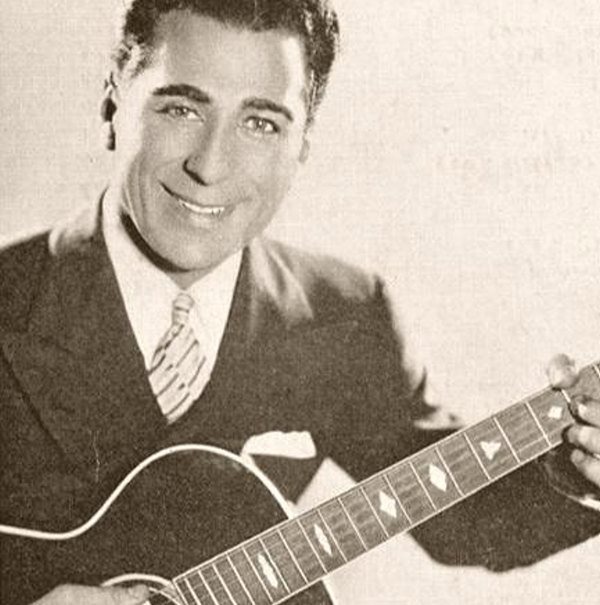 Nick Lucas (August 22, 1897, Newark, New Jersey — July 28, 1982, Colorado Springs, Colorado) born Dominic Nicholas Anthony Lucanese was an American singer and pioneer jazz guitarist, remembered as “the grandfather of the jazz guitar”, whose peak of popularity lasted from the mid-1920s to the early 1930s.

In 1922, at the age of 25, he gained renown with his hit renditions of “Picking the Guitar” and “Teasing the Frets” for Pathe Records. In 1923, the Gibson Guitars proposed to build him a concert guitar with an extra deep body. Known as the “Nick Lucas Special,” it has been a popular model with guitarists since. In the same year, he began a successful career in recording phonograph records for Brunswick and remained one of their exclusive artists until 1932.

By the late 1920s, Nick Lucas had become well known as “The Crooning Troubadour” due to the success of the recordings he made for Brunswick Records. In 1929, he co-starred in the Warner Brothers Technicolor musical, Gold Diggers of Broadway, in which he introduced the two hit songs “Painting the Clouds with Sunshine” and “Tiptoe Through the Tulips”. The latter became Lucas’ official theme song. The same year, Lucas was also featured in the studio’s all-star revue, The Show of Shows. Lucas turned down Warner Bros.’ seven-year contract offer, which went instead to fellow crooner Dick Powell.

In April 1930, Warner Bros. bought Brunswick Records. Due to their appreciation of Nick Lucas, Warner Bros. provided him with his own orchestra which was billed on his records as “The Crooning Troubadours”. This arrangement lasted until December 1931, when Warner Bros. licensed Brunswick to the American Record Corporation. The new owners were not as extravagant as Warner Bros. had previously been and Lucas lost his orchestra and eventually left Brunswik in 1932 to go freelance. He made two recordings for Durium Records in 1932 for their Hit of the Week series. These would prove to be his last major recordings.

Nick Lucas spent the rest of his career performing on radio as well as in night clubs and dance halls. He made a number of recordings for various small or independent labels, including Cavalier Records, where he was billed as the “Cavalier Troubadour.” In 1944 he reprised some of his old hits in Soundies movie musicals, and filmed another group of songs for Snader Telescriptions in 1951. In 1974, his renditions of the songs, “I’m Gonna Charleston Back to Charleston”, “When You and I Were Seventeen” and “Five Foot Two, Eyes of Blue” were featured on the soundtrack of Paramount Pictures’ The Great Gatsby (1974) with Robert Redford.

An inspiration to Tiny Tim, who made Lucas’ “Tip-Toe Through the Tulips” (written November 1929) his own theme song, Lucas became friends with the performer, and on December 17, 1969, when Tiny Tim married Miss Vicki on The Tonight Show Starring Johnny Carson, Lucas was there to sing their trademark song.