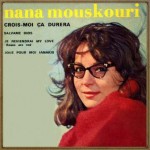 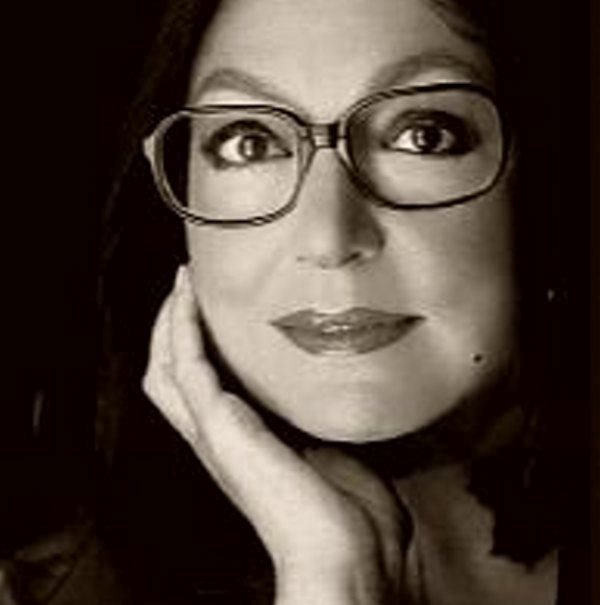 Nana Mouskouri. How to begin to describe the life of this phenomenal lady. Born Saturday, October 13, 1934 at 5 o’clock in the morning on the isle of Crete, Joanna Mouskouri, became known to family, friends and fans as simply Nana.

After three years on Crete, we find Papa, the movie projectionist, moving the family to Athens, to a small house behind the big screen of an open-aired cinema. In front of the big screen, shaded by marguerites, warm air perfumed by jasmine covered walls, stood a stage.

Place of dreams and magic… for the small child, the stage was to become not only the backdrop for the many movies that influenced her life and career, but also the place that Nana was to find the love, the peace, the hope… and acceptance she was to seek throughout life.

Projected along with the movies that fill her memories are also the images of poverty-stricken, war torn Greece. First with the German occupation during World War II, then during the even more tragic, to her, Greek civil war.

Yet even then a common thread was beginning to run though Nana’s life to alleviate the horrors. The music. Greek by temperament as well as nationality, family life often centered around music. Her mother, with a good voice herself, soon saw the potential for her young daughters, the elder sister Jenny and Nana, to perhaps find careers in music. To this end both were enrolled in singing lessons, until the day came, her singing instructor faced with losing this intensely gifted student due to the family’s financial hardship, offered to teach her for free if need be, so that Nana could continue with her studies.

Beyond the private lessons, came the Athens Conservatory of Music. Eight years of classical training, during which time she was also exposed to many other genres of music. To jazz, to blues, to gospel, to pop, listening to a rebuilt radio, late into the night, Ella Fitzgerald, Billie Holiday… singers with heart and soul, first experiences with the music transporting emotions between a singer and the audience, the sharing and communicating of feelings that crossed cultural and language barriers. Refusing the injustice of an ultimatum from her professor to only sing classical works so as not to damage her voice and training, Nana steadfastly pursued many types of music, beginning to appear in clubs.

In, 1959, she was chosen to participate in the first Greek Song Festival, singing two songs which won first and second prize, “KAPOU IPARCHI I AGAPI MOU” and “ASTERI ASTERAKI” (the proper title is “KSERO KAPIO ASTERI”), Mimis Plessas was its composer. Nana Mouskouri started as Plessas’s outstanding songress; Hadjidakis came later, according to some sources.). The first song, was written by composer Manos Hadjidakis and poet Nikos Gatsos.

Both men, influential not only to Greek music, but as friends and mentors, had long reaching effects on Nana’s life and on her career. The following year, found her claiming a tie for first place with “TIMORIA” and “KAPARISSAKI”(The Cypress Tree), music again by Hadjidakis and lyrics by Gatsos. She says of Hadjidakis: “Manos’ music helped me to dream and inspired me to always try the unreachable” and “he was my favorite composer”. Going on to present his songs around the globe as representation of her heritage, many of his songs still form the backbone of her repertoire thirty-five years later. To Gatsos, amazing poet and dear friend, she gives credit as having guided her mind to search for the truth, love and freedom of her soul as well as having written many of the lovely lyrics she still presents to her audience.

Receiving the first prize in Barcelona for her presentation of “XIPNA AGAPI MOU” , shortly afterwards, marked Nana’s first venture outside of Greece. In 1961, she was invited to the Berlin Film Festival to accept the Golden Lion award for participating in the documentary film called “Greece Land of Dreams”, in which she acted as commentator and singing five songs written by Hadjidakis. Within months, she was to receive her first Gold Album for selling over one million copies of the song WEISSE ROSEN AUS ATHEN” .

Today, referring to “THE WHITE ROSE OF ATHENS”, as her passport around the world, Nana has sung on stages in at least 65 countries, earning more than 250 gold and silver records as well as a Diamond award in Holland. Not content to only present her Greek music to her audiences, but wanting to share in their cultures and music, Nana undertook the learning of several languages. First, to Paris, and French.

Here, we find Nana Mouskouri, having traveled to France, signed to an international recording contract with Philips-Fontana Records. Faced with overcoming the language barrier of not only singing in a foreign language but having to be able to communicate with her record company and staff, she was submerged in the language, battling to learn not only the lyrics, but the very essence of French. She has now held the top female recording artist position in France for the past 15 years.

During this time, Nana came to the attention of Quincy Jones, then an “A&R” manager with Mercury Records, who asked her to the USA to record an English LP called “THE GIRL FROM GREECE SINGS” in 1962. Returning to France, she then recorded “LES PARAPLUIES DE CHEBOURG” with Michel Legrand.

As a participant in the Eurovision Song Festival in 1963, while not capturing a prize, Nana did begin to capture an audience for her albums in France, Belgium and Italy. It was during this time, that Harry Belafonte and Nana recorded an album called “AN EVENING WITH BELAFONTE AND MOUSKOURI” which then lead to several Canadian and US tours together. He was the first artist to introduce her to the love of performing on stage before an audience. Not only did she come to love concert work from Harry, he also encouraged her to to be herself, to deliver her personal message and vision of love, of peace and of hope to the audience though her music.

Years of touring, with her band the Athenians, including then-husband George Petsilas, along with numerous TV appearances, including her own series in England which were broadcast to the entire British empire of the time for 13 years, along with radio shows, have brought to us this consummated artist we now know as simply Nana. The singer. The woman. The love, the peace, and the hope.