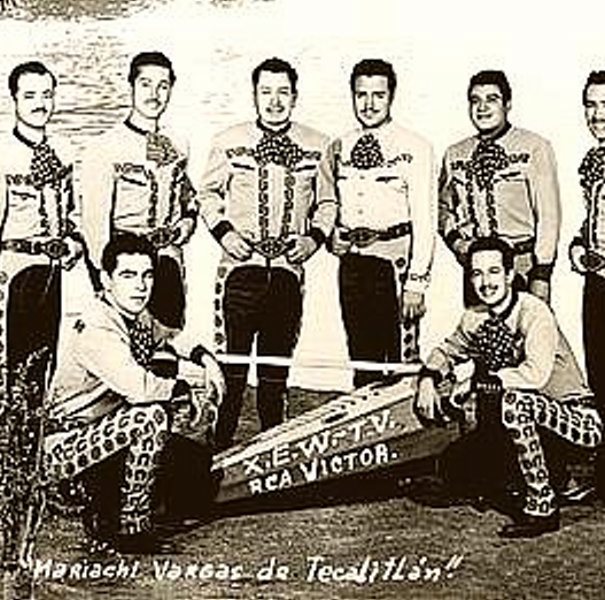 Vargas de Tecalitlán is a Mexican folk ensemble of mariachi music created in 1897 by Gaspar Vargas. From 1950 it has been under the artistic guidance of Rubén Fuentes. The group’s musical direction has been the responsibility of Don Jose “Pepe” Martinez since 1975.

The Mariachi Vargas de Tecalitlán was born in a small city called Tecalitlán, to the south of Jalisco. Founded in 1897 by Don Gaspar Vargas the formation during those years was provided by the guitarra de golpe (or mariachera) played precisely by Don Gaspar, the wooden harp by Manuel Mendoza, and two violins played by Lino Quintero and Refugio Hernandez. The combination of these instruments established the “Sonido Tecalitlán” which distinguished from the “Sonido Cocula”. (The Mariachi from Cocula utilized the guitarron and the vihuela in place of the harp and the guitarra de golpe aside from the two violins). In 1913, Don Gaspar introduced one trumpet to the group but it was not well accepted and, in later performances, its high-pitched sound was considered annoying. The cornet was replaced by another violin. The group consisted then of five elements. The son of Don Gaspar Vargas, Silvestre Vargas, joined as a violinist in 1921. From 1926 the group consisted of Gaspar Vargas – Guitarra de golpe, Manuel Mendoza – Harp, Silvestre Vargas, Trinidad Olivera and Nicolas Torres – Violins.

In 1931 Gaspar Vargas turned the leadership of Mariachi Vargas de Tecalitlán over to his son, Silvestre. As the first step in his reorganization Silvestre decided to enlarge the group to eight musicians. He invited his compatriots, the Quintero brothers, Rafael and Jeronimo to join. One played a violin and the other a guitar. Later he would add another violin played by Santiago Torres. He moved Trinidad Olivera from the violin to the guitarron, although still preserving the wooden harp. It was Silvestre who possessed a dream that his group would one day be the greatest mariachi in all Mexico and he was relentless in his pursuit of fulfilling that dream. The Mariachi Vargas was something of an oddity in the early 1930s; the members were all dressed in charro suits, they showed up on time for performances, and they were sober.

In 1933 they won first place in a Mariachi contest celebrated in Guadalajara. Then again, in Mexico City, in 1934, they were awarded another first place prize. President Lázaro Cárdenas, who enjoyed the music of “Vargas”, subsequently had the group hired as the official mariachi of the Mexico City Police Department and the group moved to Mexico City where they remained for 20 years. They provided music and entertainment for the capital city at its parks and gardens. Beginning in 1937, the Mariachi Vargas appeared in “Asi es mi Tierra”, the first of its more than 200 motion pictures. They played in many of Pedro Infante’s movies as well. In that same year they recorded their first record and signed an exclusive contract with RCA.

In 1941 they definitively integrated the trumpet into the musical interpretations of the group. Miguel Martinez was the first trumpet player for Mariachi Vargas de Tecalitlán. He is considered the creator of the mariachi-style trumpet and the best performer, teacher and example of the instrument. In 1944, Rubén Fuentes, a classical violinist with no background in mariachi music, was asked by Silvestre to join the group. He joined as a violinist and became music adjuster. Silvestre Vargas and Ruben Fuentas reorganized Mariachi Vargas de Tecalitlán and changed their image and sound. They demanded a professional presentation to overcome the unruly concept that the term “mariachis” had to the general public in those days.

Fuentes took complete responsibility for the group’s musical direction, and enriched the evolution that for many years had conserved the primitive and unstudied qualities of mariachi. The changing sound of the Mariachi Vargas de Tecalitlán was redirected without the abandonment of its roots or traditions. The Huapangos and Sones (which were two very distinctive styles of the mariachi music) were being interpreted in many diverse and different ways. The Mariachi Vargas recorded the Sones with arrangements and adaptations as patterns for other groups. This stratagem promoted the concept that all mariachi groups could be unified to those versions by taking them as examples. The traditional songs and the original sound of the mariachi began to mature in the 1950s. It was during the recordings of the “Golden Age of the Huapangos” that the compositions, arrangements and musical direction of Rubén Fuentes, and the unequaled voice of Miguel Aceves Mejía, initiated a musical shift that would change the sound and instrumentation of the mariachi. Due to the fact they change mariachi from the start they choose to keep it in away that it would still be traditional.

In 1955 Rubén Fuentes stopped performing in the group. However, to date he maintains his position as producer, musical arranger and musical director, assisted during this first age by Jesús Rodríguez de Hijar and, under both, the administrative and leadership skills of Silvestre Vargas. In 1966 Rubén Fuentes wrote “La Bikina”, a song that was recognized as the epitome of this Revolutionary New Harmony and sound of the mariachi. He continues to write and produce music for Mariachi Vargas that takes is an emotional roller coaster from the height of happiness to the despair of a broken heart or a lost love. As much in Mexico as in foreign countries the Sones and Huapangos acquire new directions.

In the 1970s interest in mariachi music was waning. But all that changed when San Antonio, Texas held its first international mariachi conference in September 1979. In 1975, Jose “Pepe” Martinez, Sr. became the musical director of Mariachi Vargas. He wrote many arrangements including “Violin Huapango” which individually showcase the different instruments and members in the group. In 1983, the Mariachi Vargas appeared for the first time at the Tucson International Mariachi Conference. A new movement began to grow and many other conferences began to develop. The Mariachi Vargas was often chosen as the headline performer.

In 1986, Linda Ronstadt appeared with the Mariachi Vargas at the Tucson International Mariachi Conference where she sang publicly in Spanish for the first time. In 1987 she released her “Canciones de mi Padre” album featuring Mariachi Vargas which won her a Grammy award for the album. She also went on a national tour with the group, giving greater international exposure to mariachi music than ever before and creating a new audience for mariachi music among non-Hispanics.

In 1989, the Mariachi Vargas released their “En Concierto” CD featuring some of the greatest renderings of classical music ever played by a mariachi group. They also accompanied Lucero in the 1990s as she rose in the ranks of contemporary musical stardom. The Mariachi Vargas de Tecalitlán initiated a series of solo recordings: Sones, Valses, Pasos Dobles, Bailes Regionales, Polkas, Clasico e International, etc. They have added more than 50 recordings of mariachi music interpreted by what has become “The Best Mariachi in the World.”

It is known by all mariachi lovers that this generation was the most talented group of musicians performing since 100 years of their foundation.[citation needed] In their album “La fiesta del Mariachi”, Mariachi Vargas de Tecalitlán, fourth generation, the group integrates to make a tribute to Jose “Pepe” Martinez, who besides his magnificent musical arrangements and direction of the group, inspired many as a composer. Their recordings on Polygram with this generation include are, “El Mariachi Vargas”, “En Concierto”, “Los sones Reyes”, “La fiesta del Mariachi” and “50 anniversary of Rubén Fuentes”. Rubén Fuentes’s arrangements and music with the Mariachi Vargas de Tecalitlán are the first five recordings for the one-hundredth anniversary of the foundation of “Vargas” in 1997.

In 2003 Mariachi Vargas de Tecalitlán began its fifth generation. Their latest recordings are, “5ta Generacion”, “Sinfonico I”, “Sinfonico II”, and “Penas, Desengaños… Y Amores”. Today the group is composed of two harps, one vihuela, one guitar, one guitarron, three trumpets and six violins. With the added instruments, a new sound has emerged that crosses all international borders. The music they play now ranges from the traditional sones to classical works as well as popurris that continue to delight audiences everywhere. In the 100 years since its foundation, the group has gone through some major changes. While there has been some departure from the tradition during that time, the group has maintained its roots through the playing of traditional Mexican sones. In 1997, “Mariachi Vargas de Tecalitlán” celebrated its first One Hundred years of foundation.