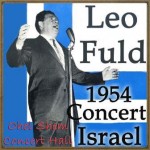 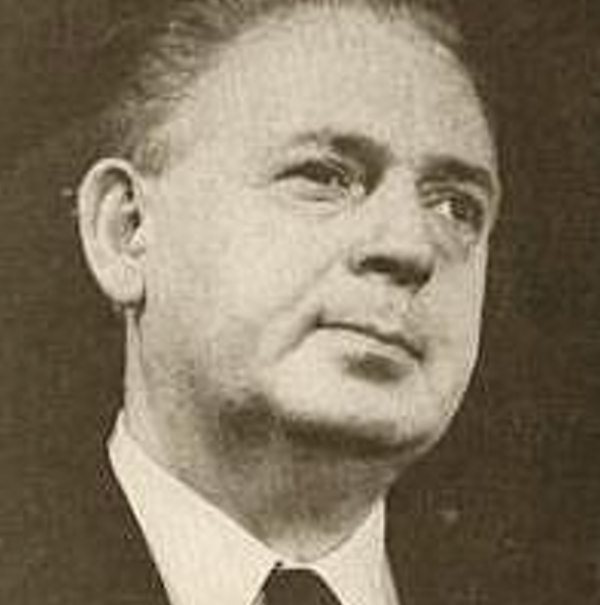 Leo Fuld, Lazarus ‘Leo’ Fuld (Rotterdam, October 29, 1912 – Amsterdam, June 10, 1997) was a Dutch singer who specialised in Yiddish songs.
Prior to World War II, Leo Fuld was one the most popular recording and concert artists in Europe.[citation needed] Possessing an instantaneously recognizable voice, Fuld recorded throughout Europe and the Americas in many languages, including Yiddish, English, German, French, Hebrew and Dutch.
His career after the war once again made his name popular throughout the world, and on the most prestigious night club and concert stages. At 83 he recorded probably his best record ever, called the Sergeant Pepper of Yiddish music by Abe Goldstein.

Leo Fuld was the third of ten children from a poor Jewish family. His father, Louis Fuld, was a merchant in occasional goods. Fuld’s talent for singing already showed at a young age during services in the synagogue. Fuld received a study grant for the Seminarium. His parents expected that the young Leo would develop into a `chazzan’, the chorister in the synagogue.

On his sixteenth birthday,Leo Fuld already began leading services in `sjoels’ in the province. At this time he would also sing secular music in bars. He made his debut in a Rotterdam bar where he sang sixty songs for one dollar. His initial successes led him to enter an audition at VARA-radio. Here he was taken on directly and made his debut beside Louis Davids. Fuld left for the United Kingdom in 1932 to audition at the BBC and was to become the first Dutch singer ever behind a BBC microphone.

He was heard by the famous Jack Hylton, who signed the 19 year old Fuld to a three year contract with his celebrated band, which resulted in engagements in every important theatre in the British Isles and the Continent. In 1936 he was signed by Clifford C. Fischer for the French Casino in New York and later the Paramount Theatre on Broadway. As an International favorite, Fuld started to adapt Yiddish and Hebrew songs for inclusion in his repertoire. At the French Casino his biggest song was Rosinkes Mit Mandeln, and the great Al Jolson came back every night at “five to ten” just to catch his performance.

In 1938 his temporary visa ran out and he had to return to Europe where he applied for an immigration visa. He caught the last boat back before the Nazis invaded the Lowlands and immediately offered his services to the Free Netherlands Government in Exile. Together with the late Hendrik Willem van Loon, Leo Fuld started the shortwave broadcasts to Holland and the Dutch East Indies. Rumors reached the UK of what was happening to the Jewish population of Holland and that almost the complete Fuld family was murdered by the Nazis. As a result, during this period he no longer could face an audience and stopped singing completely.

As he always had a talent for writing, he soon became one of the most sought after material writers on Broadway, writing for such comedians as Milton Berle, the Ritz Brothers, Jackie Miles, Jackie Gleason, Jan Murray, Jerry Lewis and Dean Martin, followed by the “Kraft Music Hall” program. He also produced, directed and wrote a comedy show called Fun For Your Money with which he toured the USA.

In 1948 he returned to Holland as an American citizen to search for news about his family. Upon his arrival, in gratitude for his wartime broadcasts, thousands of people greeted him and he was offered a contract to sing at the largest theatre in Amsterdam. Not having sung for over five years he was petrified with fear, but was such a success that he was held over for six weeks. Having regained his confidence, he accepted an engagement at the London Casino where he was a tremendous hit.

Offers followed from all over the world, and while at the Sa Majeste in Paris with his revue, he visited a little Yiddish night club where he heard a survivor of the Warsaw Ghetto sing a song which touched him deeply – “Vi ahin zol Ikh geyn?”. Leo Fuld was so impressed that he asked the composer for a copy and said “I’ll make this a world hit!”. He kept his promise; upon returning to England he wrote English lyrics and recorded it for Decca under the title “Where can I Go?”. It was also released in America, and as the saying goes, it took him twenty years to become a star overnight. He sang it on television in the Milton Berle show, the Perry Como Show and in the Frank Sinatra Show, and it was also recorded by some of America’s biggest record stars such as Ray Charles and Steve Lawrence. Among his greatest fans were such stars as Billie Holiday, Al Jolson and Édith Piaf.

Since 1949, Leo Fuld made five world tours and appeared in Argentina, Chile, Brazil, North Africa, Egypt, Israel and Lebanon. He shared the stage for 10 weeks with Edith Piaf at the Paris ABC Theatre and was engaged by the Emperor Haile Selassie I of Ethiopia to sing at the wedding of his daughter at the Imperial Palace in Addis Ababa.

his own nightclub in New York ‘Sabrah’ in New York, which was very successful, before relocating to Las Vegas. There he married to Ilone Mendels, having one daughter Mirjam Fuld-Lelah. After divorce Fuld returned to the Netherlands.
With producer Mohamed el-Fers and arranger Kees Post he recorded his last CD, The Legend for the Ghana-based company Hippo Records. On the CD Fuld sings his best known-songs, but they are provided with striking Oriental arrangements.
At 84 Leo Fuld died in his place of residence in Amsterdam.
The remainder of Leo’s family lives in the Netherlands while his two favorite nephews (Avi and Peled) live in Israel.