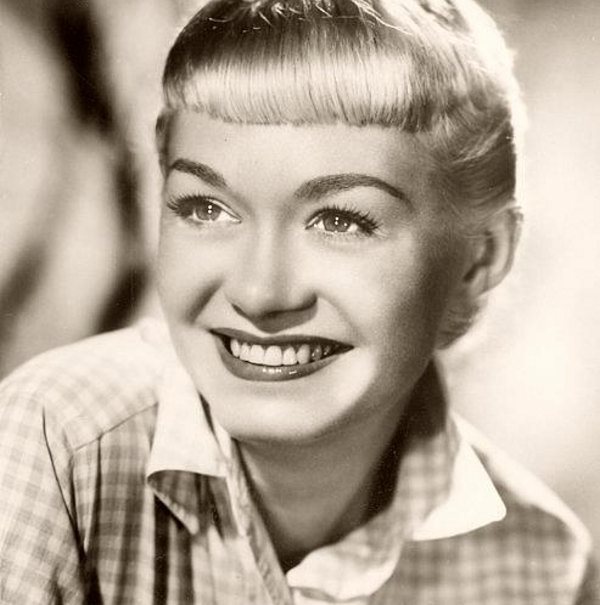 June Christy (November 20, 1925 – June 21, 1990), born Shirley Luster, was an American singer, known for her work in the cool jazz genre and for her silky smooth vocals. Her success as a singer began with The Stan Kenton Orchestra. She pursued a solo career from 1954 and is best known for her debut album Something Cool. After her death, she was hailed as “one of the finest and most neglected singers of her time.”

Shirley Luster was born in Springfield, Illinois, and moved with her family to Decatur, Illinois, when she was three years old. She began to sing with the Decatur-based Bill Oetzel Orchestra at thirteen. While attending Decatur High School she appeared with Oetzel and his society band, the Ben Bradley Band, and Bill Madden’s Band. After high school she moved to Chicago, changed her name to Sharon Leslie, and sang with a group led by Boyd Raeburn. Later she joined Benny Strong’s band. In 1944, Strong’s band moved to New York at the same time Christy was quarantined in Chicago with scarlet fever.

In 1945, after hearing that Anita O’Day had left Stan Kenton’s Orchestra, she auditioned and was chosen for the role as a vocalist. During this time, she changed her name once again, becoming June Christy.

Her voice produced successful hits such as “Shoo Fly Pie and Apple Pan Dowdy,” the million-selling “Tampico” in 1945, and “How High the Moon”. “Tampico” was Kenton’s biggest-selling record. When the Kenton Band temporarily disbanded in 1948, she sang in nightclubs for a short time, and reunited with the band two years later in 1950.

From 1947, she started to work on her own records, primarily with arranger and bandleader Pete Rugolo. In 1954, she released a 10″ LP entitled Something Cool, recorded with Rugolo and his orchestra, a gathering of notable Los Angeles jazz musicians that included her husband, multi-instrumentalist Bob Cooper and alto saxophonist Bud Shank. Something Cool was re-released as a 12″ LP in 1955 with additional selections, and then entirely rerecorded in stereo in 1960 with a somewhat different personnel. June Christy would later say that the album was “the only thing I’ve recorded that I’m not unhappy with.” Something Cool was also important in launching the vocal cool movement of the 1950s, and it hit the Top 20 Charts, as did her third album, The Misty Miss Christy.

June Christy embarked on dozens of concert tours, playing in Europe, South Africa, Australia and Japan. She toured to such an extent that eventually it began taking a toll on her marriage. She began to pull back from touring in the early 1960s.

R.M. Cook and Brian Morton, writers of The Penguin Guide to Jazz Recordings, appreciated the singer’s body of work: “Christy’s wholesome but particularly sensuous voice is less an improviser’s vehicle than an instrument for long, controlled lines and the shading of a fine vibrato. Her greatest moments—the heartbreaking ‘Something Cool’ itself, ‘Midnight Sun,’ ‘I Should Care’—are as close to creating definitive interpretations as any singer can come.”

June Christy was married to Bob Cooper. In 1954, she gave birth to a daughter, Shay Cooper. Christy’s nephew claims that, although she was agnostic, she was well versed in religion and philosophy, identifying at least partially with Buddhism.

June Christy semi-retired from the music business in 1969, in part due to her battle with alcoholism.
In 1972, she sang at the Newport Jazz Festival in New York City, where she was reunited with the Kenton Orchestra. She also performed at a handful of jazz festivals during the late 1970s and 1980s, playing with a band of all-star West Coast jazz musicians led by Shorty Rogers, as well as taking part in a number of world tours.

June Christy returned to the recording studio in 1977 to record her final solo LP, Impromptu. She recorded an interview for a Paul Cacia produced an album in 1987 called “The Alumni Tribute to Stan Kenton” on the Happy Hour label. A number of other Kenton the alumni-Shorty Rogers, Lee Konitz, Jack Sheldon, among them, plus Mort Sahl – interspersed their tunes with reminiscences of the man and the years on the road.

June Christy toured one final time in 1988, again with Shorty Rogers. Her final performance was sharing the stage with Chet Baker.
Christy died at her home in Sherman Oaks, California of kidney failure on June 21, 1990, at the age of 64. Her remains were cremated and scattered off the coast of Marina Del Rey