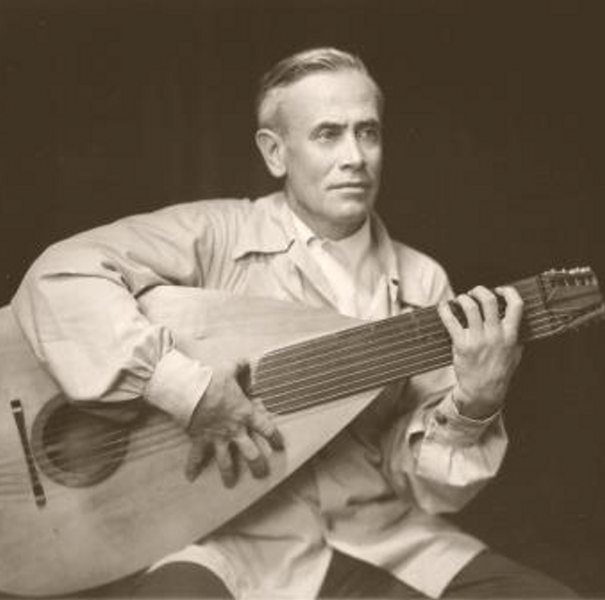 John Jacob Niles (April 28, 1892—March 1, 1980) was an American composer, singer, and collector of traditional ballads. Called the “Dean of American Balladeers”, Niles was an important influence on the American folk music revival of the 1950s and 1960s, with Joan Baez, Burl Ives, and Peter, Paul and Mary, among others, recording his songs.

Born in Louisville, Kentucky, John Jacob Niles learned music theory from his mother, and began writing down folk music as a teenager. He became a serious student of Appalachian folk music by transcribing traditional songs from oral sources while an itinerant employee of the Burroughs Corporation in eastern Kentucky, from 1910 to 1917.

After serving in the U.S. Army Air Service during World War I, in which he was injured, he studied music in France, first in Lyon, then in Paris at the Schola Cantorum, also meeting Gertrude Stein.

Returning to the United States in 1920, he continued his studies at the Cincinnati Conservatory of Music working there with Ralph Lyford. He sang opera in Chicago and folk songs on early radio.

In 1925, he moved to New York City and held various jobs in the entertainment industry. In the 1930s, he toured Europe and the United States with contralto Marion Kerby. He performed at the White House in 1938, and on occasion at the Newport Folk Festival during the 1950s.

In the 1920s, John Jacob Niles began publishing music. He made four extended trips into the southern Appalachians as an assistant to photographer Doris Ulmann, again transcribing traditional songs from oral sources, including the ballads “Pretty Polly”, “Barbara Allen”, and “He’s Goin’ Away”. On other occasions, he transcribed songs he heard sung by African Americans and by fellow soldiers in World War I.

John Jacob Niles was also a noted songwriter. His songs, many of which are based on traditional sources, include “Venezuela,” and the haunting Christmas song “I Wonder As I Wander.” Henry Miller’s Plexus includes a powerful tribute to Niles’s recording of this song. Niles composed “Go ‘Way From My Window” when he was a mere 16 years old, but did not perform it until 1930. Marlene Dietrich recorded it and sang it on stage. Bob Dylan quoted its first line in his song “It Ain’t Me Babe.” Later in life, Niles published compositions in a more classical style, including works for choir and art songs for voice and piano. The latter include his last work, a setting of poems by Thomas Merton.

Starting in 1938, he recorded a number of his compositions and transcribed songs, performing the material in an intense, dramatic manner. He employed a trademark very high falsetto to portray female characters, and often accompanied himself on an Appalachian dulcimer, lute, or other plucked stringed instrument.

In 1936, he married Rena Lipetz. They settled on the Boot Hill farm in Clark County, Kentucky, where they spent the rest of their lives.

John Jacob Niles died in Lexington, Kentucky on March 1, 1980 at age 87. He is buried at the nearby St. Hubert’s Episcopal Church. The John Jacob Niles Center for American Music at the University of Kentucky is named after him, and displays a number of traditional instruments he handcrafted.