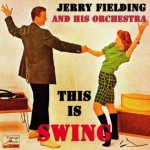 This Is Swing!, Jerry Fielding 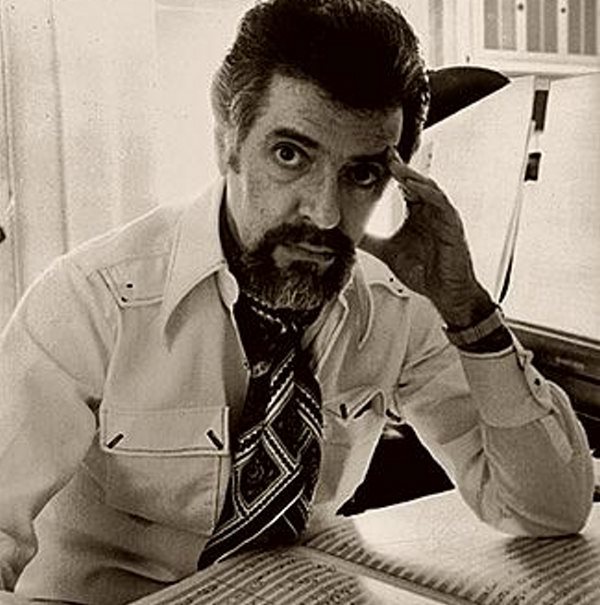 Jerry Fielding was born as Joshua Itzhak Feldman in Pittsburgh, Pennsylvania, to Hiram Harris Feldman and Esther Feldman. After trying the trombone, he took up the clarinet and joined the school band. He was offered a scholarship to the Carnegie Institute for Instrumentalists. After a short attendance, because of ill health he was bedridden for two years with an undiagnosed ailment. While housebound, he listened to the radio, and became a fan of the big band sound and Bernard Herrmann’s music for Orson Welles’s radio dramas.

Somewhat recuperated, he worked at Pittsburgh’s Stanley Theater. He worked with Max Atkins (the pit orchestra conductor at the Stanley) who taught him composition and arranging. At the age of seventeen, he left Pittsburgh to work for Alvino Rey’s swing band. His arrangement of Picnic in Purgatory in 1940 became highly popular.

This job ended when most of the band was drafted. He was too frail for service. He became vocal arranger for Lucy Ann Polk’s Town Criers and then joined Kay Kyser’s band. He became their chief arranger in 1945. He also arranged for the big bands of Claude Thornhill, Jimmie Lunceford, Tommy Dorsey, Charlie Barnet, and Les Brown.

Fieding’s first chance at backing a vocalist came in 1958 for Ruth Olay’s Easy Living LP on Mercury Records. In 1959, Fielding signed on with Signature Records for a series of albums, starting with a Christmas disk.

Fielding arranged for Kyser’s Kollege of Musical Knowledge radio program, and then became the band leader for several radio programs: The Jack Paar Program (1947–1949), The Hardy Family 1952-1953, as well as work on The Life of Riley, and the Sweeney and March Show. He led the band for several years of Groucho Marx’s You Bet Your Life and was also with the television version of You Bet Your Life from 1949-1952. For radio and recording purposes, he formed the Jerry Fielding Orchestra.

Due to his membership with the Hollywood Writers Mobilization (later the Independent Progressive party, groups considered by some to be communist fronts) he was called before the House Un-American Activities Committee in December 1953. He took the Fifth Amendment, refusing to divulge the names of fellow members, and was then blacklisted by the Hollywood film and television studios. In Las Vegas, Nevada he led a band at the Royal Las Vegas Hotel, and he also toured for the only time with his name orchestra. He also recorded albums for Decca Records including Sweet with a Beat (released 1955) and Fielding’s Formula (1957).

Fielding’s Hollywood lockout continued until 1961. In 1962, Otto Preminger selected him for the score of Advise and Consent, his first major film composition.
In 1959, Jerry Fielding was assigned to direct a short-lived Betty Hutton TV series, building on his previous musical arranging and conducting work with Hutton.[3] Fielding is well known for scoring two episodes of the first Star Trek television series: The Trouble with Tribbles and Spectre of the Gun. He also wrote the title themes for such classic TV shows as McHale’s Navy, Hogan’s Heroes, Run, Buddy, Run, He & She and The Bionic Woman.

While well known for his scores for such filmmakers as Clint Eastwood, Michael Winner, William Fruet, and Sam Peckinpah, most of which were collaborations in traditionally masculine-themed genres like westerns and action films, Fielding’s background in jazz gave him the versatility to produce such diverse works as The Nightcomers (1972), a neo-romantic musical score for acoustic orchestra (reputed to be the work of which he was most proud), to Demon Seed (1977), a startling musical work that included electronic instruments and non-tonal passages. He also did notable work with Kolchak: The Night Stalker(1974) and Funeral Home (1980), and also The Bad News Bears (1976) of which the score is an adaptation of the principal themes of Carmen.

Jerry Fielding married twice, first to Kay Kyser band production assistant, Ann Parks, in December 1946 in Tijuana. They raised two children, Georgia (d) and Hillary who carries on the Fielding musical tradition. This marriage ended in the spring of 1963. His second marriage took place on August 6, 1963, to Camille J. Williams, a Las Vegas dancer. They had two children.
He died, at the age of 57, from a heart attack followed by congestive heart failure, while in Toronto where he was scoring the motion picture Funeral Home. He was survived by wife Camille and two daughters: Claudia and Elizabeth; and former wife Ann and daughter Hillary. He is interred in Crypt 30 at Glen Haven Memorial Park in Los Angeles.