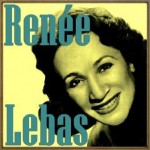 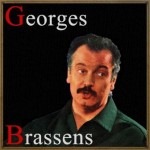 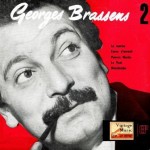 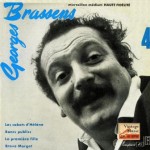 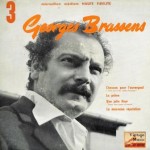 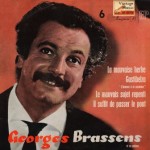 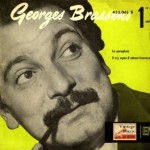 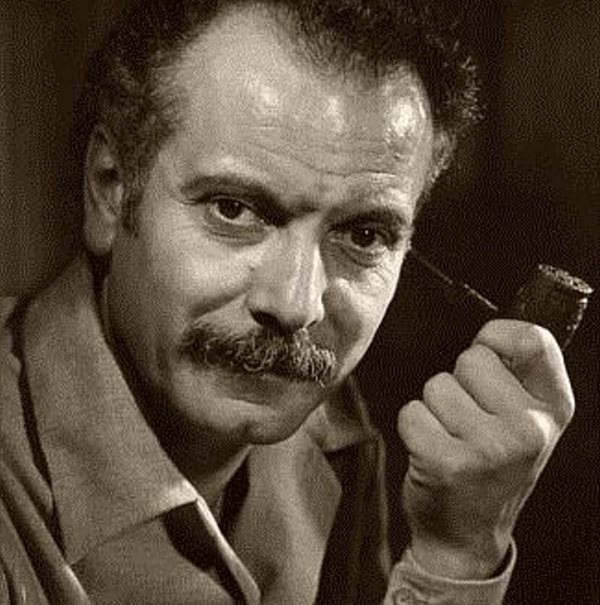 During World War II, he was forced by the Germans to work in a labor camp at a BMW aircraft engine plant in Basdorf near Berlin in Germany (March 1943). Here Brassens met some of his future friends, such as Pierre Onténiente, whom he called Gibraltar because he was “steady as a rock.” They would later become close friends.

After being given ten days’ leave in France, he decided not to return to the labour camp. Georges Brassens took refuge in a slum called “Impasse Florimont,” in the 14th arrondissement of Paris, where he lived for several years with its owner, Jeanne Planche, a friend of his aunt. Planche lived with her husband Marcel in relative poverty: without gas, running water, or electricity. Brassens remained hidden there until the end of the war five months later, but ended up staying for 22 years. Planche was the inspiration for Brassens’s song Jeanne.
Apart from Paris and Sète, he lived first in Crespières (near Paris) and latterly in Lezardrieux (Brittany).

Georges Brassens grew up in the family home in Sète with his mother, Elvira Dagrosa, father, Jean-Louis, half-sister, Simone (daughter of Elvira and her first husband, who was killed in the war), and paternal grandfather, Jules. His mother, who came from southern Italy (Basilicata province), was a devout Roman Catholic, while his father was an easy-going, generous, openminded, anticlerical man. Brassens grew up between these two starkly contrasting personalities, who nonetheless shared a love for music.

His mother—whom Brassens labelled a “missionary for songs” (militante de la chanson), Simone and Jules, were always singing. This environment imparted to Brassens a passion for singing that would come to define his life. At the time he listened constantly to his early idols: Charles Trenet, Tino Rossi, and Ray Ventura. He was said to love music above all else: it was his first passion and the path that led him to his career. He told his friend André Sève, “[It is] a kind of internal vibration, something intense, a pleasure that has something of the sensual to it.”

He hoped to enroll at a music conservatory, but his mother insisted that he could only do so if his grades improved. Consequently, he never learned to read music. A poor student, Brassens performed badly in school.

Alphonse Bonnafé, Brassens’s ninth-grade teacher, strongly encouraged his apparent gift for poetry and creativity. Brassens had already been experimenting with songwriting and poetry. Bonnafé aided his attempts at poetry and pushed him to spend more time on his schoolwork, suggesting he begin to study classical poetry. Brassens developed an interest in versification and rhyme. By Brassens’s admission, Bonnafé’s influence on his work was enormous: “We were thugs, at fourteen, fifteen, and we started to like poets. That is quite a transformation. Thanks to this teacher, I opened my mind to something bigger. Later on, every time I wrote a song, I asked myself the question: would Bonnafé like it?” By this point, music had taken a slight backstage to poetry for Brassens, who now dreamed of being a writer.

Nonetheless, personal friendships and adolescence still defined Georges Brassens in his teens. At age seventeen, he was implicated in a crime that would prove to be a turning point in his life. In order to make a little money, Georges and his gang decided to turn to small thefts whose principal victims were their respective families. Georges stole a ring and a bracelet from his sister. The police found and caught him, which caused a minor scandal.

The young men were publicly characterized as “high school mobsters” or “scum” – voyous. Some of the perpetrators, unsupported by their families, spent time in prison. While Brassens’s father was more forgiving and immediately picked up his son, Brassens was expelled from school. He decided to move to Paris in February 1940, following a short trial as an apprentice mason in his father’s business after World War II had already broken out.

Georges Brassens lived with his aunt Antoinette in the 14th arrondissement of Paris, where he taught himself to play piano. He began working at a Renault car factory. In May 1940 the factory was bombed, and France invaded by Germany. Brassens returned to the family home in Sète. He spent the summer in his home town, but soon returned to Paris, feeling that this was where his future lay.

He did not work, since employment would serve only to profit the occupying enemy. Saddened by the lack of poetic culture, Brassens spent most of his days in the library. It was then that he set a pattern of rising at five in the morning, and going to bed at sunset – a pattern he maintained the greater part of his life. He meticulously studied the great masters: Villon, Baudelaire, Verlaine and Hugo.

His approach to poetry was almost scientific. Reading, for instance, a poem by Verlaine, he dissected it image by image, attentive to the slightest change in rhythm, analysing the rhymes and the way they alternated. He drew on this enormous literary culture as wrote his first collection of poems, Des coups d’épée dans l’eau, whose conclusion foreshadowed the anarchism of his future songs:

Georges Brassens also published A la venvole in 1942, thanks to the money of his family and friends, and with the surprising help of a woman named Jeanne Planche, a neighbour of Antoinette, probably the first Brassens fan. Brassens later commented on his early works: “In those times, I was only regurgitating what I had learned reading the poets. I hadn’t transformed it into honey yet.”

In March 1943, Georges Brassens was requisitioned for the STO (Service de Travail Obligatoire: Obligatory Work Service) and was taken to Basdorf, Germany. He found time to write, but he stooped to easiness. It was nevertheless in Germany that he wrote Bonhomme and Pauvre Martin, along with more than a hundred songs, that were later either burned or frequently altered before they reached their final form (Le Mauvais sujet repenti). He also wrote the beginning of his first novel, Lalie Kakamou. In Germany, he met some of his best friends like Pierre Onténiente, whom he nicknamed “Gibraltar”, because he was “firm as a rock.” Onténiente later became his right-hand man and his private secretary.

A year after he arrived in Basdorf, Brassens was granted a ten day furlough. It was obvious to him and his new friends that he wouldn’t come back. In Paris, he had to find a hideout, but he knew very few people. He had indeed led quite a lonely life in Paris, seeing only a friend from Sète and the girls. Finally, Jeanne Planche came to his aid and offered to put him up as long as necessary. Jeanne lived with her husband Marcel in a hovel at 9 impasse Florimont, with no gas, water or electricity. Brassens accepted… and stayed there for twenty two years. He once said on the radio: “I was nice there, and I have gained since then quite an amazing sense of discomfort.” According to Pierre Onténiente: “Jeanne had a crush on Georges and Marcel knew nothing, as he started to get drunk at eight in the morning.”

Once put up at Jeanne Planche’s, Georges had to stay hidden for five months, waiting for the war to come to an end. He continued writing poems and songs. He composed using as his only instrument a small piece of furniture that he called “my drum” on which he beat out the rhythm. He resumed writing the novel he started in Basdorf, for only now did he consider a career as a famous novelist. The end of World War II and the freedom suddenly regained didn’t change his habits much, except that he got his library card back and resumed studying poetry.

The end of the war meant the homecoming of the friends from Basdorf, with whom Brassens planned to create an anarchist-minded paper, Le Cri des gueux (The villains’ cry), which never came into being for lack of money. At the same time, he set up the “Prehistoric Party” with Emile Miramont (a friend from Sète nicknamed “Corne d’Auroch” –auroch’s horn) and André Larue (whom he met in Basdorf), which advocated the return to a more modest way of life, but whose chief purpose was to ridicule the other political parties. After the failure of Le Cri des gueux, Brassens joined the Anarchist Federation and wrote some virulent, black humour tinged articles for Le Libertaire, the Federation’s paper. But the extravagance of the future songwriter wasn’t to everybody’s taste, and he soon had to leave the Federation, albeit without resentment.

Georges Brassens said in an interview: “I’m an anarchist, so much so that I always cross at the zebra crossing to avoid arguing with the police.”[this quote needs a citation] He also said: “I’m not very fond of the law. As Léautaud would say, I could do without laws […] I think most people couldn’t.”

His friends who heard and liked his songs urged him to go and try them out in a cabaret, café or concert hall. He was shy and had difficulty performing in front of people. At first, he wanted to sell his songs to well-known singers such as “les frères Jacques”. The owner of a cafe told him that his songs were not the type he was looking for. But at one point he met the singer Patachou in a very well known cafe, Les Trois Baudets, and she brought him into the music scene. Several famous singers came into the music industry this way, including Jacques Brel and Léo Ferré. He later on made several appearances at the Paris Olympia under Bruno Coquatrix’ management and at the Bobino music hall theater.

Georges Brassens died of cancer in 1981, in Saint-Gély-du-Fesc, having suffered health problems for many years, and rests at the Cimetière le Py in Sète.