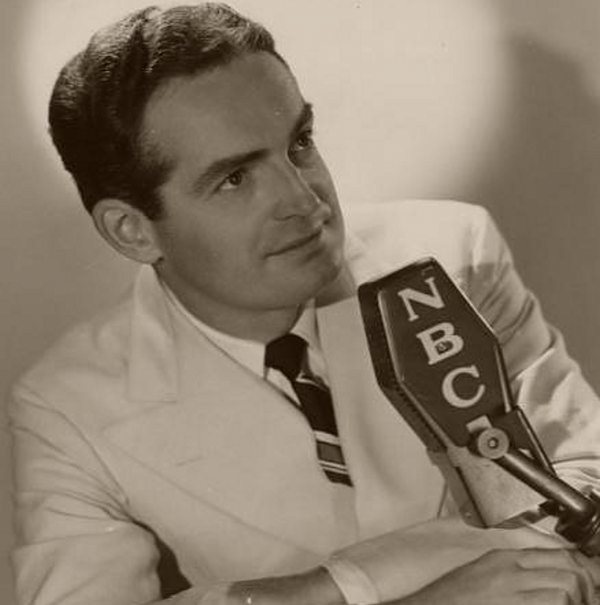 Fred Waring, Fredrick Malcolm Waring (June 9, 1900 – July 29, 1984) was a popular musician, bandleader and radio-television personality, sometimes referred to as “America’s Singing Master” and “The Man Who Taught America How to Sing.” He was also a promoter, financial backer and namesake of the Waring Blendor, the first modern electric blender on the market.

Fred Waring was born in Tyrone, Pennsylvania on June 9, 1900 to Jesse Calderwood and Frank Waring. During his teenage years, Fred Waring, his brother Tom, and their friend Poley McClintock founded the Waring-McClintock Snap Orchestra, which evolved into Fred Waring’s Banjo Orchestra. The band often played at fraternity parties, proms, and dances, and achieved local success.

He attended Penn State University, where he studied architectural engineering. He also aspired to be in the Penn State Glee Club, but he was rejected with every audition due to “college politics” and tension between him and the glee club’s director, Dr. Clarence Robinson. His Banjo Orchestra eventually became so successful that he decided to abandon his education in order to tour with the band, which eventually became known as Fred Waring and his Pennsylvanians.

He married his college sweetheart, Dorothy McAteer, in 1923, but divorced her in 1929. He remarried in 1933 to Evalyn Nair and had three children, but in 1954 they divorced.

From 1923 until late 1932, “Waring’s Pennsylvanians” were among Victor Records best-selling bands. In late 1932, he abruptly quit recording, although his band continued to perform on radio. In 1933, “You Gotta Be a Football Hero” was performed on radio to great acclaim.
Adding a men’s singing group to his ensemble, he recruited Robert Shaw, recently out of the Pomona College glee club, to train his singers. Shaw later founded the Robert Shaw Chorale, directed the Atlanta Symphony Orchestra and Chorus and became America’s preeminent conductor of serious choral music. The Waring glee club sound can be detected in some Robert Shaw Chorale recordings. Pembroke Davenport (1911–85) was Waring’s pianist and arranger.

During World War II, Waring and his ensemble appeared at war bond rallies and entertained the troops at training camps. He composed and/or performed dozens of patriotic songs, his most famous being “My America.” In 1943, Waring acquired the Buckwood Inn in Shawnee on Delaware, Pennsylvania, and renamed the resort the Shawnee Inn. To promote the Inn, Waring centered his musical activities at the Inn itself. He created, rehearsed and broadcast his radio programs from the stage of Shawnee’s Worthington Hall throughout the 1950s.
During the 1940s and early 1950s, Waring and His Pennsylvanians produced a string of hits, selling millions of records. A few of his many choral hits include “Sleep,” “Battle Hymn of the Republic,” “Smoke Gets in Your Eyes,” “Button Up Your Overcoat,” “White Christmas,” “Give Me Your Tired, Your Poor” and “Dancing in the Dark.”

In 1947, Fred Waring organized the Fred Waring Choral Workshop at his Pennsylvania headquarters in Shawnee-on-the Delaware, which was also the home of Shawnee Press, the music publisher which he founded. At these sessions, talented musicians learned to sing with precision, sensitivity and enthusiasm. When these vocalists returned home and shared what they had learned with fellow musicians, Waring’s approach to choral singing spread throughout the nation. The first Fred Waring Music Workshop in the western United States was held in June of 1968 as part of the University of Nevada’s Summer Session curriculum in Reno, Nevada. Waring taught and supervised these summer workshop for 37 years, continuing right until the day he died.

Fred Waring expanded into television with The Fred Waring Show, which ran on CBS Television from 20 June 1948 to 30 May 1954 and received several awards for Best Musical Program. (The show was 60 minutes long until January 1952, and 30 minutes thereafter.) In the 1960s and 1970s, popular musical tastes turned from choral music, but Waring changed with the times, introducing his Young Pennsylvanians, a group of fresh-faced, long-haired, bell-bottomed performers who sang old favorites and choral arrangements of contemporary songs.

In this way he continued as a popular touring attraction, logging some 40,000 miles a year.

In the 1930s, inventor Frederick Jacob Osius went to Waring for financial backing for an electric blender he had patented. The Osius patent (#2,109,501) was filed March 13, 1937 and awarded March 1, 1938. Some $25,000 later, the Waring-owned Miracle Mixer was introduced to the public at the National Restaurant Show in Chicago retailing for $29.75. In 1938, Fred Waring renamed his Miracle Mixer Corporation as the Waring Corporation, and the mixer’s name was changed to the Waring Blendor (the “o” in blendor giving it a slight distinction from “blender”).

The Waring Blendor became an important tool in hospitals for the implementation of specific diets, as well as a vital scientific research device. Dr. Jonas Salk used it while developing his polio vaccine. In 1954, the millionth Waring Blendor was sold, and it is still popular today