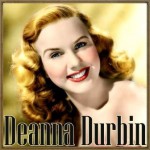 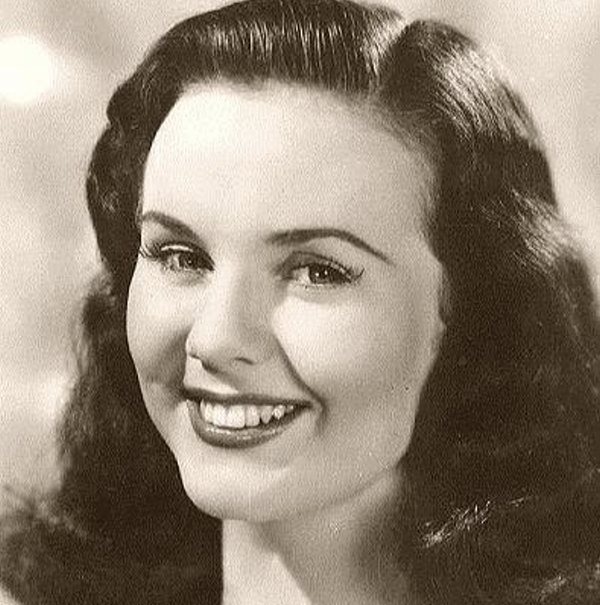 Deanna Durbin (born Edna Mae Durbin; December 4, 1921 – c. April 20, 2013) was a Canadian singer and actress, who appeared in a number of musical films in the 1930s and 1940s, her singing voice being variously described as being light but full, sweet and unaffected. With the technical skill and vocal range of a legitimate lyric soprano, she performed everything from popular standards to operatic arias.

Deanna Durbin made her first film appearance with Judy Garland in Every Sunday (1936), and subsequently signed a contract with Universal Studios. Her success as the ideal teenage daughter in films such as Three Smart Girls (1936) was credited with saving the studio from bankruptcy. In 1938, at the age of 17, Durbin was awarded the Academy Juvenile Award.

As she matured Durbin grew dissatisfied with the girl-next-door roles assigned to her, and attempted to portray a more womanly and sophisticated style. The film noir Christmas Holiday (1944) and the whodunit Lady on a Train (1945) were, however, not as well received as her musical-comedies and romances had been.
Durbin retired from acting and singing in 1949, and withdrew from public life. She married film producer-director Charles Henri David in 1950, and the couple moved to a farmhouse near Paris.

Born Edna Mae Durbin at Grace Hospital in Winnipeg, Manitoba, Canada, The daughter of James Allen Durbin and his wife Ada (née Read), who were originally from Manchester, England, she was taken to Hollywood when just a year old and began to sing children’s songs as soon as she could talk. Her parents would become U.S. citizens after moving their family from Winnipeg to Southern California in 1923. By the time she was ten, her parents recognised that she had definite talent and took her to a singing teacher, leading her to sing in local entertainments.
She was given the professional name Deanna at the beginning of her association with Universal Studios in 1936, when she was still 14 years old. Durbin had an older sister named Edith, who recognized Deanna’s musical talents at an early age and helped Deanna to take singing lessons at Ralph Thomas Academy. This led to her discovery by MGM in 1935.

In late 1936, Cesar Sturani, who was the General Music Secretary of the Metropolitan Opera, offered Deanna Durbin an audition. Durbin turned down his request because she felt she needed more singing lessons. Andrés de Segurola, who was the vocal coach working with Universal Studios (and himself a former Metropolitan Opera singer), believed that Deanna Durbin had an excellent opportunity to become an opera star. De Segurola had been commissioned by the Metropolitan Opera to watch her progress carefully and keep them advised. Durbin started a collaboration with Eddie Cantor’s radio show in 1936. This collaboration lasted until 1938 when her heavy workload for Universal Studios made it imperative for Durbin to discontinue her weekly appearances on Cantor’s radio show.

Deanna Durbin signed a contract with MGM in 1935 and made her first film appearance in a short subject, Every Sunday (1936), with another young contract player, Judy Garland. The film was to serve as an extended screen test for the pair as studio executives were questioning the wisdom of having two female singers on the roster. Ultimately Louis B. Mayer decreed that both girls would be kept, but by the time that decision was made, Durbin’s contract option had elapsed. Durbin was quickly signed to a contract with Universal Studios and made her first feature-length film Three Smart Girls (also 1936). The film was an immediate success and established Durbin as a star. (Ironically, upon seeing Every Sunday with Garland and Durbin, producer Joe Pasternak at Universal was casting Three Smart Girls and wanted to borrow Garland from Metro. However, Garland was not available at the time.

When Pasternak found out that Durbin was no longer with MGM, he cast her in the film instead.) It would take Garland three more years to become a star at MGM after the release of The Wizard Of Oz in 1939. This prompted a bit of a rivalry between the two singers for many years, mostly on Garland’s part. According to Christopher Finch author of Garland’s biography Rainbow: The Stormy Life Of Judy Garland, Garland “regarded her rival as a rank amateur, however talented” and was known to do a cruel imitation of Durbin’s singing posture at parties. When she appeared on such television talk shows as The Jack Paar Program and The Tonight Show Starring Johnny Carson in the 1960s, Garland would tell humorous anecdotes about Durbin’s “one eyebrow”. It was never revealed how Durbin felt about Garland. However, in the early 1950s when Garland was performing in England, she telephoned Durbin in France. When Durbin asked her what she was up to, Garland told her she was in Great Britain singing in concerts. Upon hearing that, Durbin was reported to have said, “My God, girl, are you still at it?”.
The huge success of Durbin’s films was reported to have saved Universal from bankruptcy.

In 1938 she received a special Academy Juvenile Award, along with Mickey Rooney. Joe Pasternak, who produced many of the early Deanna Durbin movies, said about her:
Deanna’s genius had to be unfolded, but it was hers and hers alone, always has been, always will be, and no one can take credit for discovering her. You can’t hide that kind of light under a bushel. You just can’t, no matter how hard you try!
In 1936, Durbin auditioned to provide the vocals for Snow White in Disney’s animated film Snow White and the Seven Dwarfs, but was ultimately rejected by Walt Disney, who declared the 15-year-old Durbin’s voice “too old” for the part.
The five-year association of Deanna Durbin, producer Joe Pasternak and director Henry Koster ended following the film It Started With Eve (1941). After Pasternak moved from Universal to MGM, Durbin went on suspension between October 16, 1941 and early February 1942 for refusing to appear in They Lived Alone, scheduled to be directed by Koster. Ultimately, the project was canceled when Durbin and Universal settled their differences. In the agreement, Universal conceded to Durbin the approval of her directors, stories and songs.

Universal continued to cast her in musicals, and two sequels to her first film with the studio, Three Smart Girls, were produced. Following Three Smart Girls Grow Up (1939), the second sequel was a wartime story called Three Smart Girls Join Up, but Durbin issued a press release announcing that she was no longer inclined to participate in these team efforts and was now performing as a solo artist. The Three Smart Girls Join Up title was changed to Hers to Hold. Joseph Cotten, who played alongside Deanna Durbin in Hers to Hold, praised her integrity and character in his autobiography. Rodgers and Hammerstein’s original Broadway production of Oklahoma! in 1943 might have showcased Deanna Durbin as original Laurie, but Universal refused to accept the proposal.
Can’t Help Singing (1944), her only Technicolor film, features some of the last melodies written by Jerome Kern plus lyrics by E. Y. Harburg. A musical comedy in a Western setting, this production was filmed mostly on location in southern Utah. Her co-star was Robert Paige.

Deanna Durbin tried to assume a more sophisticated movie persona in such vehicles as the World War II story of refugee children from China, The Amazing Mrs. Holliday (1943), directed in part by Jean Renoir, who left the project before its completion; the film noir Christmas Holiday (1944), directed by Robert Siodmak; and the whodunit Lady on a Train (1945), but her substantial fan base preferred her in light musical confections. Such was Durbin’s international popularity that diarist Anne Frank pasted her picture to her bedroom wall in the Achterhuis where the Frank family hid during World War II. The picture can still be seen there today.
In 1946, Universal merged with two other companies to create Universal-International. The new regime discontinued much of Universal’s familiar product and scheduled only a few musicals. Durbin stayed on for another four pictures, but her last two releases, Up in Central Park (1948), a film adaptation of the 1945 Broadway musical, and a project announced as For the Love of Mary and finally released as Something in the Wind (1947), saw her box-office clout diminish. In private life, Durbin continued to use her given name; salary figures printed annually by the Hollywood trade publications listed the actress as “Edna Mae Durbin, player.” In 1946 she was the second highest paid woman in the United States, just behind Bette Davis, and in 1947 Deanna Durbin was the top-salaried woman in the United States. Her fan club ranked as the world’s largest during her active years.

On August 22, 1948, two months after the latter film was finished, Universal-International announced a lawsuit which sought to collect from Durbin $87,083 in wages the studio had paid her in advance. Durbin settled the complaint amicably by agreeing to star in three more pictures, including one to be shot on location in Paris. Ultimately, the studio would allow Deanna’s contract to expire on August 31, 1949, so the three films were not produced. Durbin, who obtained a $200,000 ($1,962,238 as of 2013), severance payment chose at this point to retire from movies. Her former producer Joe Pasternak tried to dissuade her. She told him: “I can’t run around being a Little Miss Fix-It who bursts into song – the highest-paid star with the poorest material.” She had already turned down Bing Crosby’s request for her to appear in two of his projects for Paramount Pictures, Top o’ the Morning and A Connecticut Yankee in King Arthur’s Court.

Deanna Durbin married an assistant director, Vaughn Paul, in 1941; the couple divorced in 1943. Her second marriage, to film writer-producer-actor Felix Jackson in 1945, produced a daughter, Jessica Louise Jackson, but a divorce followed in 1949.
In Paris on December 21, 1950, shortly after her 29th birthday, Deanna Durbin married Charles David, the producer-director of both French and American pictures who had guided her through Lady on a Train (1945). Durbin and David raised two children: Jessica (from her second marriage to Felix Jackson) and Peter (from her union with David).

Over the years, Durbin resisted numerous offers to perform again, including MGM’s offer to appear in the film versions of Cole Porter’s Kiss Me Kate (1953) and Sigmund Romberg’s operetta The Student Prince (1954). In 1951, Durbin was invited to play in London’s West End production of Kiss Me Kate, and was reportedly Alan Jay Lerner’s first choice to portray Eliza Doolittle in the 1956 Broadway cast of My Fair Lady. Suggestions that Durbin sing at major Las Vegas casinos also went unfulfilled.

In 1983, film historian David Shipman was granted a rare interview by Durbin. In the interview, she steadfastly asserted her right to privacy and maintained it until the end of her life, declining to be profiled on internet websites.

Deanna Durbin made it known that she did not like the Hollywood studio system. She emphasized that she never identified herself with the public image that the media created around her. She spoke of the Deanna “persona” in the third person, and considered the film character “Deanna Durbin” to be a by-product of her youth and not her true identity.

In her heyday, she lived near W.C. Fields, who was no fan of her music. Hearing her practise her singing infuriated the curmudgeonly comedian.
Durbin’s husband of more than 48 years, Charles David, died in Paris on March 1, 1999.
On April 30, 2013, a newsletter published by the Deanna Durbin Society reported that Durbin died “in the past few days”, quoting her son, Peter H. David, who thanked her admirers for respecting her privacy. No other details were given. In a subsequent report, the Associated Press quoted a family friend who said Durbin had died on or about April 20.