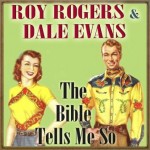 The Bible Tells Me So, Roy Rogers & Dale Evans 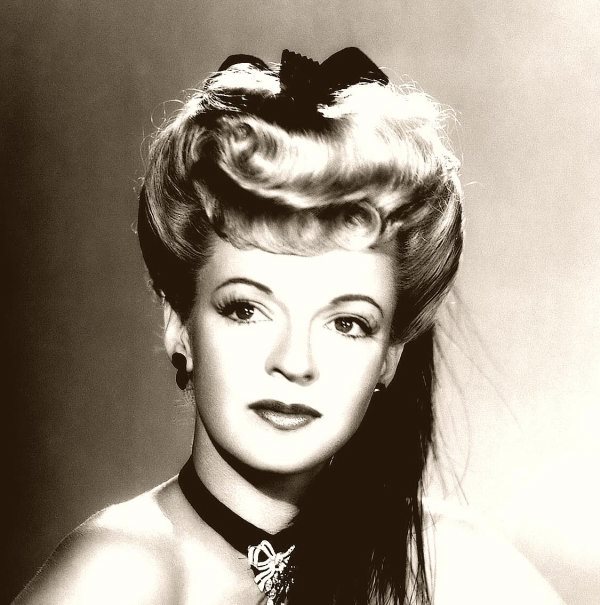 Dale Evans (October 31, 1912 – February 7, 2001) was an American writer, film star and singer-songwriter. She was the second wife of singing cowboy Roy Rogers.

Born in Uvalde, Texas, she had a tumultuous early life. She was born in 1912 to T. Hillman Smith and Bettie Sue Wood, and was named Lucille Wood Smith at birth; the name was changed to Frances Octavia Smith while she was still an infant.

At age 14, she eloped with her first husband, Thomas F. Fox, to whom she bore one son, Thomas F. Fox, Jr., when she was 15. A year later, she found herself in Memphis, Tennessee, a single parent, pursuing a career in music. She landed a job with local radio stations (WMC and WREC), singing and playing piano. Divorced in 1929, she took the name Dale Evans in the early 1930s to promote her singing career.

After beginning her career singing at the radio station where she was employed as a secretary, Dale Evans had a productive career as a jazz, swing, and big band singer that led to a screen test and contract with 20th Century Fox studios. She gained exposure on radio as the featured singer for a time on the Edgar Bergen/Charlie McCarthy show.

Throughout this early period, Dale Evans went through two additional failed marriages, the first of which was to August Wayne Johns from 1929 to 1935. In 1937, she married her third husband, accompanist and arranger Robert Dale Butts; they divorced nine years later. Neither of these marriages produced any children. During her time at 20th Century Fox, the studio promoted her as the unmarried supporter of her teenage “brother” Tommy (actually her son Tom Fox, Jr.). This deception continued through her divorce from Butts in 1946 and her development as a cowgirl co-star to Roy Rogers at Republic Studios.

Dale Evans married Roy Rogers on New Year’s Eve 1947 at the Flying L Ranch in Davis, Oklahoma, where they had earlier filmed the movie Home in Oklahoma. Art and Mary Jo Rush were best man and matron of honor. The marriage was Rogers’ second and Evans’ fourth but was successful; the two were a team on- and off-screen from 1946 until Rogers’ death in 1998. At this point, Dale Evans ended the deception regarding her son, Tommy.

Roy had an adopted child, Cheryl, and two biological children, Linda and Roy (Dusty) Jr., from his first marriage. Together they had one child, Robin Elizabeth, who died of complications of Down syndrome shortly before her second birthday.

Her life inspired Evans to write her bestseller Angel Unaware. Dale Evans was very influential in changing public perceptions of children with developmental disabilities and served as a role model for many parents. After she wrote Angel Unaware, a group then known as the “Oklahoma County Council for Mentally Retarded Children” adopted its better-known name Dale Rogers Training Center in her honor. Evans went on to write a number of religious and inspirational books. Roy and Dale appeared many times with Billy Graham in Crusades all over the country, singing gospel songs and giving their testimony.

Evans and Rogers would adopt four other children: Mimi, Dodie, Sandy, and Debbie.

From 1951-57, Evans and Rogers starred in the highly successful television series The Roy Rogers Show, in which they continued their cowboy and cowgirl roles, with her riding her trusty buckskin horse, Buttermilk. Alice Van-Springsteen served as a double for both Dale Evans and Gail Davis, the actress who starred in the syndicated series Annie Oakley, often performing such tasks as tipping over wagons and jumping railroad tracks. In addition to her successful TV shows, more than 30 films and some 200 songs, Evans wrote the well-known song “Happy Trails”.

In later episodes of the program, she was outspoken in her Christianity, telling people that God would assist them with their troubles and imploring adults and children to turn to Him for guidance. In late 1962, the couple co-hosted a comedy-western-variety program, The Roy Rogers and Dale Evans Show, which aired on ABC. It was canceled after three months, losing in the ratings to the first season of The Jackie Gleason Show.

In 1964, Dale Evans spoke at a “Project Prayer” rally attended by 2,500 at the Shrine Auditorium in Los Angeles. The gathering, which was hosted by actor Anthony Eisley, star of ABC’s Hawaiian Eye series, sought to flood the United States Congress with letters in support of school prayer, following two decisions in 1962 and 1963 of theUnited States Supreme Court which struck down the practice as in conflict with theEstablishment Clause of the First Amendment to the United States Constitution.

Joining Evans and Eisley at the Project Prayer rally were Walter Brennan, Lloyd Nolan,Rhonda Fleming, Pat Boone, and Gloria Swanson. Evans declared, “It’s high time that all America stood up to be counted. Let our children learn of the Lord and be free.” Eisely and Fleming added that Rogers, John Wayne, Ronald W. Reagan, Mary Pickford, Jane Russell, Ginger Rogers, and Pat Buttram would have attended the rally had their schedules permitted. In the 1970s, Evans recorded several solo albums of religious music. During the 1980s, the couple introduced their films weekly on the former The Nashville Network. In the 1990s, Evans hosted her own religious television program.

Dale Evans died of congestive heart failure on February 7, 2001 at the age of 88 in Apple Valley, California. She was interred at Sunset Hills Memorial Park in Apple Valley, next to Rogers.[8][9]