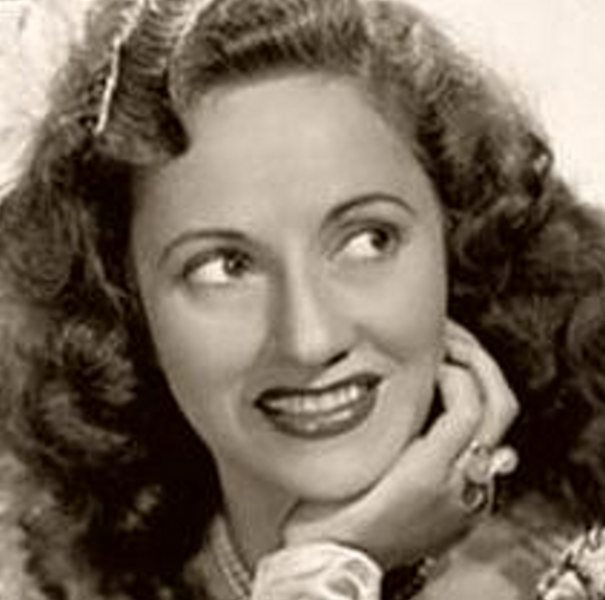 Connee Boswell, Constance Foore “Connee” Boswell (December 3, 1907, Kansas City, Missouri – October 11, 1976, New York) was an American female vocalist born in Kansas City but raised in New Orleans, Louisiana. With her sisters, Martha and Helvetia “Vet” Boswell, she performed in the 1930s as The Boswell Sisters and became a highly influential singing group during this period via recordings and radio. Connee herself is widely considered one of the greatest jazz female vocalists and was a major influence on Ella Fitzgerald who said, “My mother brought home one of her records, and I fell in love with it….I tried so hard to sound just like her.”

In 1936, Connee’s sisters retired and Connee continued on as a solo artist (having also recorded solos during her years with the group).

The Boswells came to be well known locally while still in their early teens, making appearances in New Orleans theaters and radio. They made their first recordings for Victor Records in 1925, which included “Cryin’ Blues” where Connee is featured singing in the style of her early influence, the African American singer Mamie Smith. The Boswell Sisters became stage professionals that year when they were tapped to fill in for an act at New Orleans’ Orpheum Theatre. They received an invitation to come to Chicago and perform in 1928 and honed their act on the Western Vaudeville Circuit. When their tour ended they traveled to San Francisco. The hotel that had been recommended had a less than savory reputation, and the man at the desk suggested that these three young ladies might be better off in another hotel. That man, Harry Leedy, would later become their manager on a handshake and become a permanent part of Connee’s life as her husband. Harry was also part owner of Decca Records.
Connee Boswell was married only once and had no children.

The Boswell Sisters travelled to Los Angeles where they performed on local radio and “side-miked” for the soundies, including the 1930 production “Under Montana Skies.” They did not attain national attention, however, until they moved to New York City in 1930 and started making national radio broadcasts. After a few recordings with Okeh Records, they made numerous recordings for Brunswick Records from 1931-1935. In 1935, the sisters had a #1 hit with “The Object of My Affection”, the biggest of twenty top 20 records they would enjoy.
In 1936, the group signed to Decca Records and after just three releases called it quits (the last recording was February 12, 1936). Connee Boswell continued to have a successful solo career as a singer for Decca.
All through her career with The Boswell Sisters, and well into the 1940s, her name was spelled “Connie”. She later changed the spelling to Connee, reputedly because it made it easier to sign autographs.
Connee Boswell was also an arranger and a composer.

Connee sang from a wheelchair – or seated position – during her entire career, due to either a childhood bout with polio. The general public was not aware of her condition although Boswell herself did not keep this secret. During World War II, she tried to get involved with the USO tours but was not given permission to travel overseas. The Army thought it might not be a morale-booster to have a singer who used a wheelchair perform for the troops.
Connee Boswell was a favorite duet partner of Bing Crosby and they frequently sang together on radio as well as recording several hit records as a duo in the 1930s and 1940s. Boswell, Crosby, and Eddie Cantor recorded a version of Alexander’s Ragtime Band that was a #1 hit in 1938.In 1939, Crosby and Boswell had three hit duet records that each climbed into the top 12 on Billboard; “An Apple For The Teacher” climbed all the way to #2.

Connee Boswell also had several dozen solo hits, including “Moonlight Mood” in 1942. Boswell’s career slackened in the 1950s but she still recorded occasionally and would be featured on a number of television broadcasts including a regular stint on the 1959 series “Pete Kelly’s Blues”.
Connee Boswell died from stomach cancer at age 68 in 1976, in New York. A number of her recordings are now available on CD, both as a soloist and part of the Boswell Sisters.