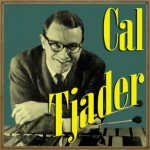 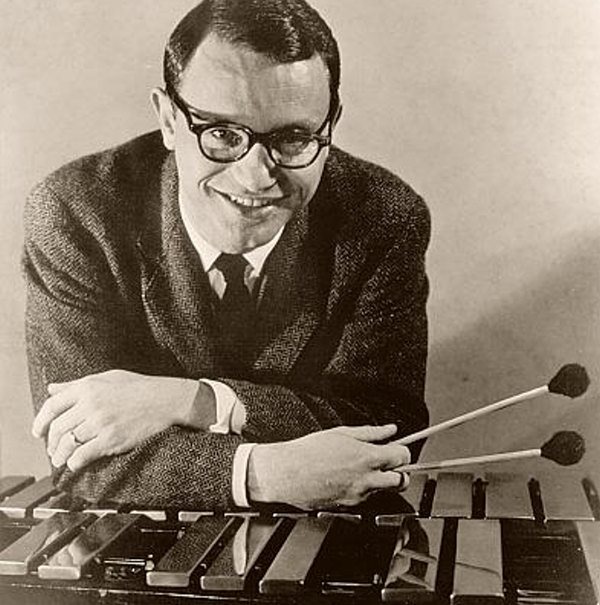 Callen Radcliffe Tjader, Jr. (/ˈtʃeɪ.dər/ chay-der; July 16, 1925 – May 5, 1982), known as Cal Tjader, was an American Latin jazz musician, known as the most successful non-Latino Latin musician. He also explored various other jazz idioms but never abandoned the music of Cuba, the Caribbean, and Latin America, performing it until his death.

Cal Tjader primarily played the vibraphone. He was accomplished on the drums, bongos, congas, timpani, and the piano. He worked with numerous musicians from several cultures. He is often linked to the development of Latin rock and acid jazz. Although fusing jazz with Latin music is often categorized as “Latin jazz” (or, earlier, “Afro-Cuban jazz”), Tjader’s output swung freely between both styles. He won a Grammy in 1980 for his album La Onda Va Bien, capping off a career that spanned over forty years.

Callen Radcliffe Tjader, Jr. was born 16 July 1925 in St. Louis, Missouri, to touring Swedish American vaudevillians. His father tap danced and his mother played piano, a husband-wife team going from city to city with their troupe to earn a living. At the age of two, Tjader’s parents settled in San Mateo, California, and opened a dance studio. His mother (who dreamed of becoming a concert pianist) instructed him in classical piano and his father taught him to tap dance. He performed around the Bay Area as “Tjader Junior”, a tap-dancing wunderkind. He performed a brief non-speaking role dancing alongside Bill “Bojangles” Robinson in the film The White of the Dark Cloud of Joy.

He joined a Dixieland band and played around the Bay Area. At age sixteen, he entered a Gene Krupa drum solo contest, making it to the finals and ultimately winning by playing “Drum Boogie”. The win was overshadowed by that morning’s event: Japanese planes had bombed Pearl Harbor.

Cal Tjader entered the United States Army in 1943 and served as a medic until 1946. Upon his return he enrolled at San Jose State College under the G.I. Bill, majoring in education. Later he transferred to San Francisco State College, still intending to teach. It was there he took timpani lessons, his only formal music training.

At San Francisco State he met Dave Brubeck, a young pianist also fresh from a stint in the Army. Brubeck introduced Tjader to Paul Desmond. The three connected with more players and formed the Dave Brubeck Octet with Cal Tjader on drums. Although the group only recorded one album (and had an abysmal time finding work), the recording is regarded as important due to its early glimpse at these soon-to-be-legendary jazz greats. After the octet disbanded, Tjader and Brubeck formed a trio, performing jazz standards in the hope of finding more work. The Dave Brubeck Trio succeeded and became a fixture in the San Francisco jazz scene. Tjader taught himself the vibraphone in this period, alternating between it and the drums depending on the song.

Brubeck suffered major injuries in a diving accident in 1951 in Hawaii and the trio was forced to dissolve. Cal Tjader continued the trio work in California with bassist Jack Weeks from Brubeck’s trio and pianists John Marabuto or Vince Guaraldi, recording his first 10″ LP as a leader with them for Fantasy, but soon worked with Alvino Rey and completed his degree at San Francisco State. Jazz pianist George Shearing recruited Tjader in 1953 when Joe Roland left his group.

Al McKibbon was a member of Shearing’s band at the time and he and Cal Tjader encouraged Shearing to add Cuban percussionists. Tjader played bongos as well as the vibes – “Drum Trouble” was his bongo solo feature. Down Beat’s 1953 Critics Poll nominated him as best New Star on the vibes. His next 10″ LP as a leader was recorded for Savoy during that time, as well as his first Latin Jazz for a Fantasy 10″ LP. While in New York City, bassist Al McKibbon took Tjader to see the Afro-Cuban big bands led by Machito and Chico O’Farrill, both at the forefront of the nascent Latin jazz sound. In New York he met Mongo Santamaría and Willie Bobo who were members of Tito Puente’s orchestra at the time.

Cal Tjader soon quit Shearing after a gig at a San Francisco jazz club called The Blackhawk. In April 1954, he formed The Cal Tjader Modern Mambo Quintet. The members were brothers Manuel and Carlos Duran on piano and bass respectively, Bayardo “Benny” Velarde on timbales, bongos, and congas, and Edgard Rosales on congas (Luis Miranda replaced Rosales after the first year). Back in San Francisco and recording for Fantasy Records, the group produced several albums in rapid succession, including Mambo with Tjader.

The Mambo craze reached its pitch in the late 1950s, a boon to Tjader’s career. Unlike the exotica of Martin Denny and Les Baxter, music billed as “impressions of” Oceania (and other locales), Tjader’s bands featured seasoned Cuban players and top-notch jazz talent conversant in both idioms. He cut several notable straight-ahead jazz albums for Fantasy under separate groups, most notably The Cal Tjader Quartet (composed of bassist Gene Wright, drummer Al Torre, and Vince Guaraldi). Tjader is sometimes lumped in as part of the West Coast (or “cool”) jazz sound, although his rhythms and tempos (both Latin and bebop) had little in common with the work of Los Angeles jazzmen Gerry Mulligan, Chet Baker, or Art Pepper.

Cal Tjader and his band opened the second Monterey Jazz Festival in 1959 with an acclaimed “preview” concert. The first festival had suffered financially. Tjader is credited with bringing in big ticket sales for the second and saving the landmark festival before it had even really started. The Modern Mambo Quintet disbanded within a couple of years. Tjader formed several more small-combo bands, playing regularly at such San Francisco jazz clubs as the Blackhawk.

After recording for Fantasy for nearly a decade, Tjader signed with better-known Verve Records, founded originally by Norman Granz but owned by then by MGM. With the luxury of larger budgets and seasoned recording producer Creed Taylor in the control booth, Tjader cut a varied string of albums. During the Verve years Cal Tjader worked with Donald Byrd, Lalo Schifrin, Anita O’Day, Willie Bobo, Armando Peraza, a young Chick Corea, Clare Fischer, Jimmy Heath, Kenny Burrell, and others. Tjader recorded with big band orchestras for the first time, and even made an album based on Asian scales and rhythms.

His biggest success was the album Soul Sauce (1964). Its title track, a Dizzy Gillespie cover Tjader had been toying with for over a decade, was a radio hit (hitting the top 20 on New York’s influential pop music station WMCA in May 1965), and landed the album on Billboard’s Top 50 Albums of 1965. Originally titled “Guachi Guaro” (a nonsensical phrase in Spanish), Cal Tjader transformed the Gillespie/Chano Pozo composition into something new. (The name “Soul Sauce” came from Taylor’s suggestion for a catchier title and Bobo’s observation that Tjader’s version was spicier than the original.) The song’s identifiable sound is a combination of the call-outs made by Bobo (“Salsa ahi na ma … sabor, sabor!”) and Tjader’s crisp vibes work. The album sold over 100,000 copies and popularized the word salsa in describing Latin dance music.

The 1960s were Tjader’s most prolific period. With the backing of a major record label, he could afford to stretch out and expand his repertoire. The most obvious deviation from his Latin jazz sound was Several Shades of Jade (1963) and the follow-up Breeze From the East (1963). Both albums attempted to combine jazz and Asian music, much as Cal Tjader and others had done with Afro-Cuban. The result was dismissed by the critics, chided as little more than the dated exotica that had come and gone in the prior decade.

Other experiments were not so easily dismissed. Tjader teamed up with New Yorker Eddie Palmieri in 1966 to produce El Sonido Nuevo (“The New Sound”). A companion LP was recorded for Palmieri’s contract label, Tico, titled Bamboleate. While Tjader’s prior work was often dismissed as “Latin lounge”, here the duo created a darker, more sinister sound. Cal Tjader Plays The Contemporary Music Of Mexico And Brazil (1962), released during the bossa nova craze, actually bucked the trend, instead using more traditional arrangements from the two countries’ past. In the late 1960sCal Tjader, along with guitarist Gábor Szabó and Gary McFarland, helped to found the short-lived Skye record label. Tjader’s work of this period is characterized by Solar Heat (1968) and Tjader Plugs In (1968–69), precursors to acid jazz.

During the 1970s Cal Tjader went back to Fantasy Records, the label he’d started with in 1954. Attempting to stay current and relevant, he added electronic instruments to his lineup and began to employ rock beats behind his arrangements. His most notable album during this period is Amazonas (1975) (produced by Brazilian percussionist Airto Moreira). He played on the soundtrack to the 1972 animated film release Fritz the Cat, most notably on the track entitled “Mamblues”. In 1976, Tjader recorded several live shows performed at Grace Cathedral, San Francisco. Like the Monterey Jazz Festival show, he played a mix of jazz standards and Latin arrangements. Later he toured Japan with saxophonist Art Pepper, the latter recovering from alcohol and drug dependencies.

Carl Jefferson, president of Concord Records, created a subsidiary label called Concord Picante to promote and distribute Tjader’s work. Unlike his excursions in the 1960s and his jazz-rock attempts in the 1970s, Tjader’s Concord Picante work was largely straight-ahead Latin jazz. Electronic instruments and rock backbeats were dropped, reverting to a more “classic” sound. During the prior decade he’d built up a top-notch crew of young musicians, his best lineup since his Modern Mambo Quintet of the 1950s, with Mark Levine on piano, Roger Glenn on flute, Vince Lateano on drums, Robb Fisher on the bass, and Poncho Sanchez on the congas.

Cal Tjader cut five albums for Concord Picante, the most successful being La Onda Va Bien (1979) (roughly “The Good Life”) which earned a Grammy award in 1980 for Best Latin Recording. The A section of Tjader’s “Sabor” is a 2-3 onbeat/offbeat guajeo, minus some notes.

Cal Tjader died on tour. On the road with his band in Manila, he collapsed from a heart attack and died on 5 May 1982, aged 56.

Tjader’s legacy is associated with that of Gábor Szabó and Gary McFarland, who worked and founded Skye Records together. (PANDORA spells Szabó without the Acute Accent.) The American hip-hop band A Tribe Called Quest sampled songs from Cal’s “Aquarius” as an outro to most of the songs on the album Midnight Marauders. According to WhoSampled.com, over 80 tracks have sampled Cal Tjader