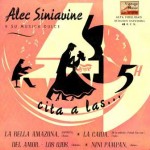 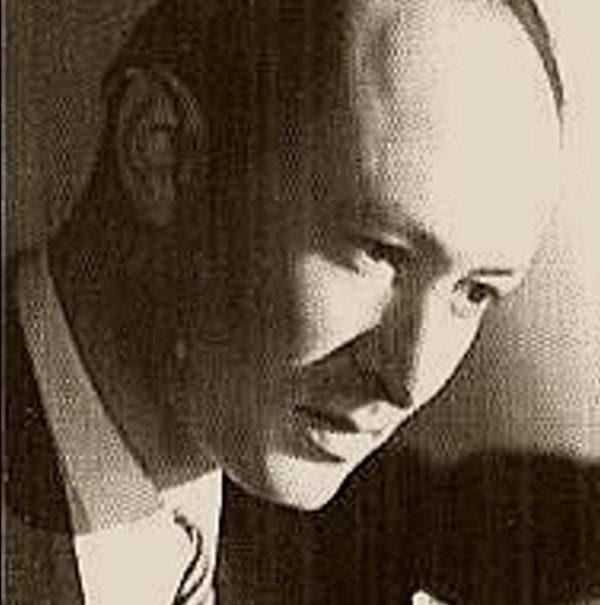 Alec Siniavine (Alexandre  Siniavine). Born on May 4th, 1906 in Odessa (Fédération of Russia), deceased in Paris in 1996 – Composer – Pianist/performer
Born near the Black Sea shore, Alexandre SINIAVINE was proud of his name: “Everyone suggested me to change it, but I do not like what is false. I decided to keep it” …

Alec’s parents weren’t musicians, but provided to the young Alec a piano on which he tinkled. His father, an important Doctor, died when Alec was a few months old. Raised by a devoted mother, they eventually moved to Romania.
Alec Siniavine took piano lessons, but he disliked so much the scales and mechanical exercises that it was necessary to confine him with the instrument, so much so that one day he jumped out through a window to play soccer with friends.

His mother and his brother (who was seven years older and played piano very well) had to explain him the necessity of the fingers gymnastics. Alexandre worked so hard that he entered to the Bucharest Conservatoire at the age of eighteen, pursuing at the same time law course at the University of the city. During his studies, he earned his living by playing piano in Clubs all night long and specially in the famous Bucharest cabaret “The Cabaret of the bear”. First prizewinner at the Bucharest Conservatoire, he received a scholarship to perfect himself in Paris. But the political situation changed in Romania and Alec had to meet the expense of such a trip.

Arrived in Paris, he looks for a job and goes every day at the “Tabac Pigalle”, a famous café at that time.
Alec Siniavine finds modest jobs, playing in “weddings and banquets”. Little by little, his growing reputation allows him to play piano night after night in the most famous cabarets of Paris : “Kasbek”, “Casanova”, “L’Aigle noir”.
During the same period, Alec Siniavine is granted French citizenship.

In the 30s, he has the luck to meet one of the directors of the Transatlantic General Company (who possesses, among others things, the “Normandy”) thanks to whom his dreams of traveling finally come true. So, during a year, he is a pianist on the maritime lines taking him from France to Canada, to New York, to Mexico, etc…
The next two seasons (1933-1934) are spent in Monte-Carlo, where Alec is introduced to Germaine and Jean Sablon. This encounter will change the course of his existence.

An evening when he accompanies Germaine Sablon, Raoul Breton, one of the most important publishers in Paris, asks him :”Can you compose?”. Like every musician, Alec Siniavine had done some compositions without lending them a lot of importance. Then the publisher gives him lyrics from Louis Sauvat entitled “La dernière bergère” (“The Last Shepherdess”) and asks him to compose the music. Without too much conviction, Alec Siniavine writes the music which is an immediate hit performed and recorded by Jean Sablon (1935), Guy Berry, Charles and Johnny…
Alec’s first hit “La dernière bergère” was followed by a lot of others: “Pour vous, j’ai fait cette chanson”, “Quand tu partiras”, created by Germaine Sablon, “Rêverie” created by Jean Sablon, “Attends moi mon amour” (composed in captivity in 1940 – a delicate and moving evocation of tenderness and liberty, dedicated to his wife, the actress Raymonde Allain) performed by Léo Marjane, André Claveau, Roland Gerbeau, the Anonymous Singer ; “Ma pamplemousse”, “Le petit nez retroussé” created by Maurice Chevalier, “Feuille au vent”, “Insensiblement”, “Cette nuit est à nous”, “Ukraine”, “Paris, tu n’as pas changé”, “La bague à Jules” created by Patachou (1958) and so many others.

Alec Siniavine meets the biggest artists of the time: Edith Piaf, Jeanette Mac Donald (who discovers Alec in 1937 at the Wolrd Fair and is so delighted of his services that she takes him to Belgium and Holland where she goes to sing). André Claveau, Jean Sablon, Lucienne Delyle, Maurice Chevalier, Danielle Darieux and new artists Juliette Greco, Patachou, Fançois Deguelt will record and perform Alec’s songs.
His heart creates a melody, his fingers model it on the keys of his piano and here is a new hit that soars up. Alec Siniavine is inclined to be a dreamer and his temper leads him towards a dreaming and soft music. His favourite formation is made up of : himself at the piano + a guitar + a bass + drums. At this time, the same formation was used by the British Charlie Kunz (Record CD – ILD 642203) who was one of his favourite pianists. His purpose, as for Charlie Kunz, was to make the piano sing. And he succeeded perfectly.

So, Alec Siniavine has become the charming companion of dreaming hours for a lot of listeners.
As an outstanding pianist, Alec Siniavine enjoys the privilege to make a living as an artist. Free from the concern to make a hit at any price and even to the detriment of quality, he composes only songs that he likes.
Although he has a great feeling for other arts, Alec devotes himself exclusively to music. He likes too much quality to try to make something he could’nt make well.
Alec Siniavine gives recitals all around the world and performs in the biggest cabarets: “Sporting d’été” (1938), “Carrère” (1942 and 1947) the “Ciro’s” in Monte-Carlo , “Les Capucines” (in Paris, in 1946) and finally opens a cabaret with his friend André Claveau in 1953.
Besides his songs, Alec has composed a musical with Jean Delettre “La belle saison” (interpreted by Pills & Tabet and Lucienne Boyer) and the music of a show, “Version française”, produced in1950 at the “Théâtre de l’Arbalette” in Paris, of which the main parts were played by André Claveau, Maurice Pérès, Jacqueline Richard and some unknown artist named Louis de Funès….

Alec Siniavine decide then to retire and dies in Paris in 1996.
Don’t miss the opportunity to get this wonderful CD album covering the 1940-1950 period, a key to get into the soft musical world of this great pianist-composer.
Yves-Henri Faget – mars 2005