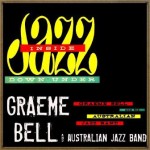 Inside Jazz Down Under, Graeme Bell 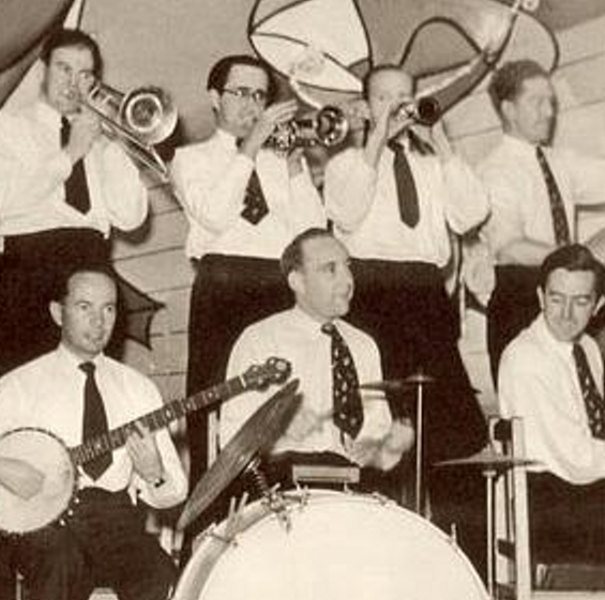 Bell, Graeme Emerson (1914-2012)
The pianist and composer Graeme Bell, in his habitual black beret, red shirt and black vest, was often called the “father of Australian jazz” — elevated no doubt with the passage of time to “grandfather” — and was older than the recorded form of the music — if not the live version.

Graeme Bell, who was born in the inner-Melbourne suburb of Richmond at the beginning of World War I, said his earliest memory was seeing his father hang out flags to mark the end of the war in 1918.
Jazz was born in New Orleans at the turn of the 20th century but was first recorded in 1917. It was a while, however, before jazz and Bell were introduced.

Graeme Bell was the first of two sons of John Bell, a comedian who worked in light theatre and musicals, and his wife, Elva Rogers, a contralto who had toured Australia as a support singer to Nellie Melba.

His father was also a health fanatic and made sure the boys, Graeme and Roger, exercised in the backyard in their pyjamas every morning, which the elder Bell sibling claimed was the reason for his good health and long life.
Graeme Bell , along with Roger, showed early promise in music; he had weekly piano lessons for many years, which he was grateful for in times to come.

Thanks to this early classical training, he could work when jazz wasn’t paying its way. Over the years, to make ends meet, he taught, played accompaniment for singers and wrote arrangements for other musicians. He made more than 1500 recordings.
The Bell brothers were educated at Scotch College, where the older boy excelled in art and sport. Roger, however, fell in with a group of musically minded young men, including “Lazy” Ade Monsbourgh, and they were the ones who encouraged Bell to play jazz because they wanted a pianist.

When he left school, Bell spent nine long years working in an insurance company, but at least it gave him time to continue his art studies in the evenings, as well as play. He wanted to be an artist but soon realised music would be an easier life.
In his touring days, he would get special early wake-up calls to visit art galleries and for a while after moving to Sydney in the late 1950s, had a private gallery business, which was supportive of women artists.

During his time with the insurance company, Bell met and married Margot Bias. He was declared unfit for army service during World War II, but was offered a job with an army entertainment unit in Mackay, Queensland. The marriage lasted only about a year and in 1946, he married Elizabeth Watson, but that marriage didn’t last either. He married Dorothy Gough in early 1961 and this time it lasted.
By 1947, Bell was playing regularly in Melbourne and had a permanent booking with the communist Eureka Youth League, which sponsored his Australian Jazz Band’s participation in that year’s World Youth Festival in Prague. The band was so popular, it stayed in Czechoslovakia for more than four months.

Graeme Bell then took the group on tour through Europe and Britain, where they were a huge success.
The band is often credited with starting the European “trad jazz” revival of the time and over the years, returned to Europe, as well as making a study tour of the United States, where the music journal DownBeat said, “Bell’s is unquestionably the greatest jazz band outside America”.

On his return from Czechoslovakia to Australia, Bell founded the Swaggie record label – mostly for jazz – and toured for the ABC.

He then went back to Europe in 1951 for a tour. He accompanied the American blues singer William “Big Bill” Broonzy and played in London’s then-new Festival Hall.

Bell’s original band broke up in 1953 and he formed a new group for troop tours to Korea and Japan. He moved to Sydney in 1957 and toured Australia with Johnny Ray.
In 1962, he put together a new band, the Graeme Bell All Stars, who played at the Chevron Hotel in Kings Cross, Sydney’s poshest night spot of the era.

Graeme Bell also put on floor shows at other major clubs, made records and had a national television show, Trad Pad (later Just Jazz) on Channel Seven. He continued to tour in Australia and overseas. He was awarded an MBE in 1978.
When he turned 70 in 1984, he celebrated with a five-week tour of one-night stands around Victoria. He still looked so young, people asked him if he was the son of the famous Graeme Bell.

In 1990, Bell took the Graeme Bell All Stars, with the singer Little Pattie, to China and also went to south-east Asia and played at Expo ’90 in Osaka, Japan. That year, he was also appointed as an Officer of the Order of Australia (AO) for his services to music.

Graeme Bell continued to work when work was to be had. In 1995, he marked turning 85 by narrating a tribute concert in Melbourne. In 1997, he was inducted into the ARIA Hall of Fame.

In 2003, members of the All Stars reformed as the Graeme Bell Reunion Band, played some concerts and made a record. In the week after he turned 90 in 2004, he played two concerts.
The Australian jazz awards, which started in 2003, are named The Bell Awards in his honour. In 2006, Live Performance Australia gave him the James Cassius Williamson Award, which is to “recognise examples of outstanding contribution to and lifetime achievement in the Australian live performance industry”.