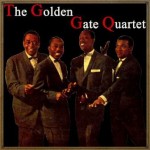 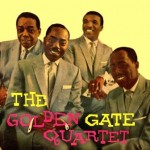 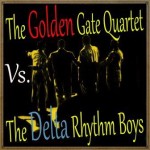 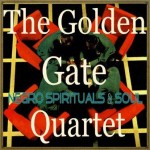 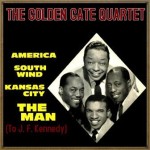 The Man (To J. F. Kennedy), The Golden Gate Quartet 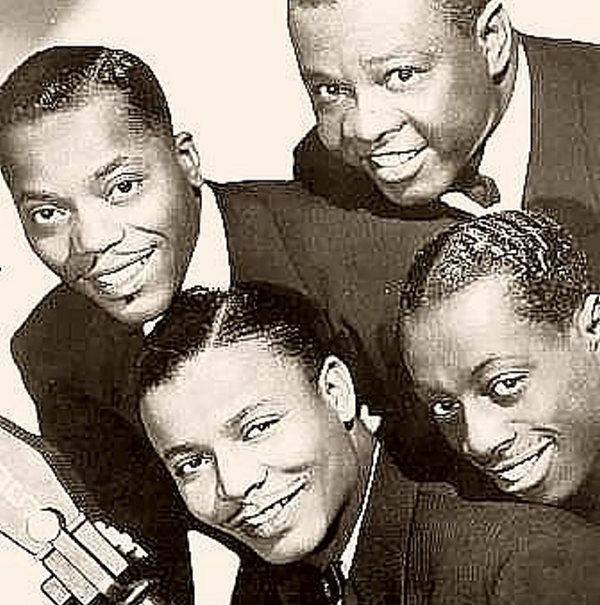 The Golden Gate Quartet (aka The Golden Gate Jubilee Quartet) is an American vocal group. It was formed in 1934 and, with changes in membership, remains active. It is the most successful of all of the African-American gospel music groups who sang in the jubilee quartet style.

From 1935, The Golden Gate Quartet sang in churches and on local radio, gaining a regular spot on radio station WIS in Columbia, South Carolina in 1936. They began as a traditional jubilee quartet, combining the clever arrangements associated with barbershop quartets with rhythms borrowed from the blues and jazz like scat singing. They developed a broad repertoire of styles — from Owens’ mournful, understated approach in songs such as “Anyhow” or “Hush, Somebody’s Calling My Name”, to the group’s highly syncopated arrangements in “Shadrach, Meshach and Abednego”. Like The Mills Brothers in popular music, they would often include vocal special effects in their songs, imitating train sounds in songs such as “Golden Gate Gospel Train”. Landford often sang lead, using his ability to range from baritone to falsetto, while Johnson narrated in a hip syncopated style that became the hallmark for the group. Wilson’s bass served as the anchor for the group and Owens harmonized with Landford and Johnson.

In 1937 they moved to station WBT in Charlotte, North Carolina, and soon afterwards won a contract with Bluebird Records. After their first recording session on August 14, 1937, in which they recorded 14 songs in two hours, they were contracted to record 12 tracks per year. In 1938, they were recruited by John Hammond to appear at the first From Spirituals To Swing concert held at Carnegie Hall in New York City, after which their popularity grew. They stayed in New York and were signed up for a residency at the Cafe Society nightclub. As well as performing and recording gospel songs they also recorded some secular songs for RCA Records, who were intending to bill them as “The Four Chocolate Bars”, but the recordings were not released. In 1939, William Landford left the group to form a new group, the Southern Sons; he was replaced by Clyde Riddick (1913-1999).

In 1940 The Golden Gate Quartet signed a new contract with Columbia Records’ subsidiary Okeh label, and shortened their name to the Golden Gate Quartet. They soon had a nationwide radio program and the opportunity to sing at Franklin Delano Roosevelt’s inauguration in 1941, becoming the first black musical group to sing at Constitution Hall and later performing several times at the White House.

They continued to be popular during World War Two, making several appearances in Hollywood films and singing secular music, including some unique popular front songs such as “Stalin Wasn’t Stallin'” that mixed humor with political commentary. The Quartet appeared in films such as Star Spangled Rhythm (1942), Hit Parade of 1943 (1943), Hollywood Canteen (1944), and the Danny Kaye film A Song Is Born (1948). In the latter film, they performed the songs “Joshua Fit the Battle of Jericho” and part of “A Song Is Born” with Louis Armstrong and Virginia Mayo.

Johnson was called into the US Navy in 1943, followed by Wilson in 1944; they were temporarily replaced by Cliff Givens – who later left to join firstly The Ink Spots and then Billy Ward and His Dominoes – and Alton Bradley. The group moved first to the main Columbia record label and then, in 1948, to Mercury Records. Johnson left in 1948 to form The Jubalaires, and was replaced by Orville Brooks (1919-1997).

The Golden Gate Quartet lost their pre-eminent position in gospel music after the war, when they faced competition from the newer hard gospel quartets. They continued in their old style, offering sharper political commentary in songs such as “God’s Gonna Cut ‘Em Down”, but losing much of their audience to quartets such as the Dixie Hummingbirds and the Soul Stirrers. Henry Owens left in 1950 to become a preacher and solo artist. Alton Bradley returned to replace him, but then left in 1952 when he was replaced by Eugene Mumford (1925-1977), previously of The Larks.

The Golden Gate Quartet revived their career in 1955, however, when they toured Europe for the first time, where they became widely popular. The group moved to Paris in 1959 and has continued touring, primarily in Europe, since then. During his stint in the US Army, in Germany, Elvis Presley, who was a huge admirer of their work since his early childhood, visited them backstage at “Le Lido”, in Paris, and stayed to watch their entire show, staying also with them at the hotel “Prince de Galles”. During this time there were further personnel changes: Orville Brooks left and was replaced by Franck Todd and later in turn by Caleb Ginyard (1910-1978), and Eugene Mumford was replaced by Clyde Wright (born May 1, 1928, Charlotte, North Carolina).
Since the 1950s, the group has been primarily based in Europe. They toured widely in the late 1950s, including US State Department-sponsored tours around the world. In 1959, the group started a two-year residency at the Casino de Paris.

The Golden Gate Quartet made their first tour of Africa in 1962, and during the early 1960s gradually expanded their accompanying band to incorporate guitar, piano, bass and drums. Through the 1960s they toured widely in Europe, with a long-established line-up of Orlandus Wilson, Clyde Riddick, Caleb Ginyard, and Clyde Wright. In 1971, Ginyard and Wright left, and were replaced by Paul Brembly (the great-nephew of Orlandus Wilson) and Calvin Williams.[5] Wright returned to the group in 1985 to replace Williams, who returned to the US.

The group undertook a 60th anniversary world tour in 1994. Riddick remained with the group until his retirement in 1995, and Wilson, the last surviving member of the original group, until his death in 1998. Riddick was replaced by Frank Davis. The position of bass singer has in recent years been filled by Thierry Francis, Richard Phillips, and, since 2005, by Anthony Gordon.

The Golden Gate Quartet was inducted into The Vocal Group Hall of Fame in 1998.