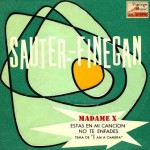 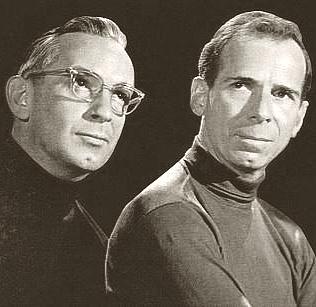 The Sauter-Finegan Orchestra was an American swing jazz band popular in the 1950s.
The orchestra was led by Eddie Sauter and Bill Finegan, who were both experienced big band arrangers. Sauter played mellophone, trumpet, and drums, and had attended Columbia University and Juilliard; Finegan had studied at the Paris Conservatory. They began recording together in 1952, using inventive arrangements that made use of a variety of unusual instruments, including many orchestral instruments as well as oddities like the kazoo and the beaten human chest.

Their first chart appearance was with “Doodletown Fifers”, their version of a Civil War tune called “Kingdom Coming and the Year of Jubilo”. “Nina Never Knew” (featuring vocalist Joe Mooney) and “The Moon is Blue” (with Sally Sweetland) soon followed on the charts. With the success of the singles, they put together a 21-member touring ensemble and began playing venues in 1953. However, because the group played in dance halls rather than concert venues, they encountered little success on the road, and quit touring in 1955 after having accrued much debt.

In March 1957, the pair disbanded the group, and Sauter moved to Germany; Finegan continued as an arranger. They reunited in the studio in 1959 to release a new album, Return of the Doodletown Fifers, and to do jingles for advertisers. After Sauter’s death in 1981, Finegan revived the name Sauter-Finegan Orchestra for concerts in New York City in the 1980s.

“World Without Time,” from “Adventures in Time” was chosen by host Richard Heffner as the theme music for The Open Mind (TV series).